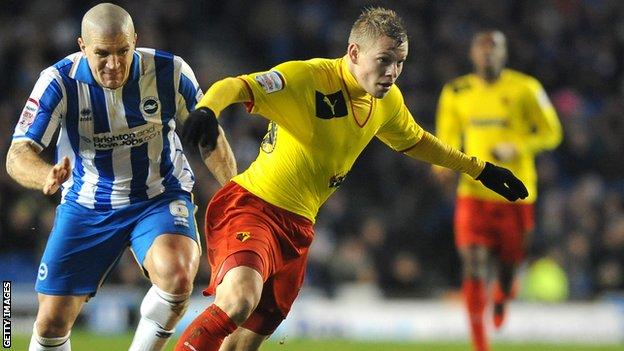 Matej Vydra scored twice in two minutes to keep Watford in the Championship play-off places with a win at Brighton.

Gianfranco Zola's side had chances in the first half before Troy Deeney broke the deadlock after the break.

David Lopez equalised from the penalty spot after Kazenga LuaLua was pushed over, but Czech striker Vydra restored Watford's lead with a deflected shot within three minutes.

Vydra raced clear for his second goal a minute later to seal victory.

The two managers, former team-mates at Chelsea, embraced warmly just before kick-off but it was Gianfranco Zola who was the happier of the two by the final whistle, while Gus Poyet was left to reflect on a run of four games without a win.

Both sides spurned chances to open the scoring early on, with Daniel Pudil putting a free header a long way wide for Watford, while Andrea Orlandi shot over the bar after finding space for Brighton on the edge of the area at the opposite end.

Manuel Almunia was equal to a long-range effort from LuaLua with a comfortable save, and Pudil denied Lopez inside the box with a well-timed block to a Craig Mackail-Smith cross.

Watford's win was their sixth away from home this season, as many as they managed in the entire 2011/12 campaign

The away side were the stronger towards the end of the first half, Tomasz Kuszczak making a fingertip save to deny Vydra, while Deeney failed to hit the target with a header from six yards out.

But Deeney made amends nine minutes into the second half, latching on to a Pudil pass while the defence watched Vydra, before shooting powerfully underneath Kuszczak from an angle inside the area.

The hosts levelled from the penalty spot 10 minutes later, with Almunia spilling the ball on the edge of the area before Tommie Hoban fouled LuaLua as he tried to collect the rebound. David Lopez gave the Watford goalkeeper no chance from 12 yards, but Brighton's lead was to last just three minutes.

The home defence backed off as Vydra advanced, and his shot from 25 yards out had enough power to loop up over Kuszczak into the net after taking a deflection off Adam El Abd's knee.

Vydra doubled the lead just 74 seconds later with his 12th goal of the campaign, racing clear of the Brighton back four to go one-on-one with the keeper before shooting low into the net.

Almunia's save from Will Hoskins was the closest Brighton came to pulling a goal back, but Watford had few other problems in claiming their sixth away win of the season.

Brighton manager Gus Poyet: We were a bit too open, we exchanged attack for attack and chance for chance, and we tried to address that at half-time to try to win the game.

But it was totally opposite, there were three mistake to give them the chance for the first goal. After that, Watford were the better team, we were always chasing, always in a hurry.

They were good on the counter-attack, and they deserved it.

Watford manager Gianfranco Zola: We had a few problems at the beginning, in the first 15 minutes they really caused us a lot of problems, because they are a good team.

In the Championship, we you need to get the right to play your own football, you also have to work hard when the opposition has the ball and today my team was excellent in that.