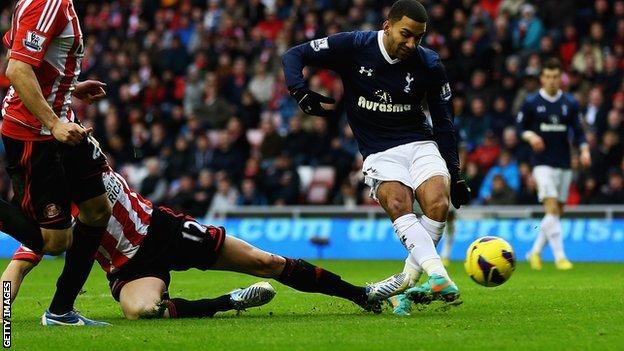 Tottenham won their sixth league game out of eight as they came from a goal down to beat Sunderland and move up to third in the Premier League.

Sunderland's Carlos Cuellar headed into his own net for Tottenham's leveller.

"Tottenham now have 19 points from 24 and their win at the Stadium of Light has halted the recent resurgence of Sunderland. Two quick goals in the second half turned the game in Tottenham's favour, with Aaron Lennon's finish proving the winner"

Spurs winger Aaron Lennon sealed the comeback when he burst through on goal and coolly slotted home.

Jermain Defoe and Adebayor should have given the scoreline a more emphatic look but the Spurs strikers were denied by keeper Simon Mignolet.

Spurs winger Gareth Bale was again booked for diving and, although there did appear to be contact when he was challenged by Craig Gardner, he will miss his side's next game following a fifth yellow card of the campaign.

The Welshman later insisted he

Sunderland beat Manchester City on Boxing Day but, despite taking the lead, could not cause another upset.

Both teams went into the match in good form and the early stages involved them battling for some sort of superiority.

However, the defences of each club were proving disciplined until a mistake by Black Cats midfielder James McClean after 25 minutes sparked a spell of Spurs pressure.

McClean lost possession on the halfway line and Lennon slid a pass to release Adebayor, whose shot was saved with his foot by the on-rushing Mignolet.

Almost immediately, right-winger Lennon skipped past a defender and sent in an inviting cross which an unmarked Bale steered wide from 10 yards.

Soon after, Cuellar mistimed a clearance from a Defoe shot and, even though Adebayor beat Mignolet, his poked shot came back off the crossbar.

The visitors failed to capitalise and were punished when they failed to deal with a set-piece.

A Sebastian Larsson free-kick to the near post fell for Black Cats striker Steven Fletcher and, after his shot was well saved by keeper Hugo Lloris, the loose ball was slotted in by O'Shea.

But Tottenham have an impressive away record this season and racked up a sixth win on the road with a second-half fightback.

The visitors were gifted an equaliser when Cuellar headed Kyle Walker's near-post corner into his own goal and quickly conceded a second.

A Lennon pass came back off Sunderland defender Matthew Kilgallon to the Spurs winger, who flicked the ball past O'Shea before producing a smart finish.

The closest the home side came to a leveller was when Spurs keeper Lloris parried an Adam Johnson strike but it was the visitors who looked the more likely to score.

Defoe chose to control and shoot from a Bale cross rather than go for a first-time shot, allowing Mignolet to scamper across and block his strike.

Mignolet also came out of his goal to save an Adebayor shot late on as Spurs advanced their chances of a top-four spot.

Tottenham manager Andre Villas-Boas: "It was extremely good. Apart from the Everton fixture we have had an excellent December and to finish the year with a win like this is very good for us. I am very happy for the team. We have played a tremendous amount of games in December and it's good to get this result.