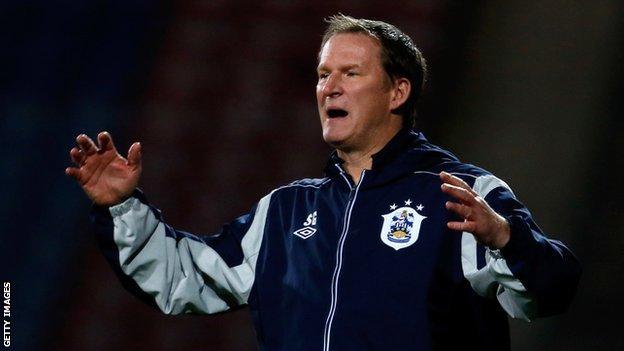 Referee Mick Russell booked a player twice but failed to send him off as Huddersfield drew with Yorkshire rivals Sheffield Wednesday.

He showed Wednesday midfielder but let him play on, despite protests from Huddersfield's players.

The home side could have secured the win in the final minute but substitute James Vaughan flashed a volley wide.

The result leaves Town without a win in nine but the Owls are unbeaten in four.

The visitors, who moved out of the bottom three with three wins from their last three matches, will be the happier of the two sides, following the mistake by Russell.

Helan, on loan from Manchester City, received his first booking after eight minutes and was shown a second yellow on 26 minutes, which should have meant the visitors playing for over an hour with just 10 men.

The Frenchman also went closest to opening the scoring in the first half but goalkeeper Alex Smithies saved well with his feet.

Town created their first chance a minute before the break when Simon Church had a shot saved by Chris Kirkland.

Michail Antonio and substitute Mamady Sidibe both had chances for Dave Jones' side while Sidibe also forced Smithies into an excellent save, with just minutes remaining.

Huddersfield manager Simon Grayson: "The lineman should be helping out. He's not done it deliberately, but you can't make major mistakes like that.

"He's put (Michail) Antonio's number in his book, but he was nowhere near the incident."

Sheffield Wednesday boss Dave Jones: "I don't know about a first booking, it was a penalty. That's the controversy.

"Helan has been clipped and he's not the type of lad to dive. I think we should have won the game, that's what I'm perplexed about.

"We should have had a penalty and we had the chance towards the end with Sidibe's header."