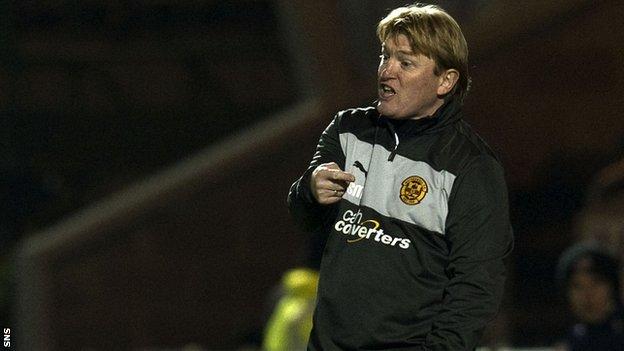 The Steelmen could now be nudged off second place if Inverness beat Dundee on Saturday.

"We went right to the last minute, played some really good football and it just wasn't our night," said McCall.

"How we never got an equaliser I'll never know. But I said to the boys, there are ways to lose games and I certainly want to go down fighting."

How we never got an equaliser I'll never know

Substitute Bob McHugh gave Motherwell hope by scoring in off the bar 15 minutes before time.

But Danny Lennon's team held on to come out on top in a pulsating match at St Mirren Park.

"I thought it was great entertainment and a terrific game," said McCall.

"They took their chances, two terrific goals from Steven Thompson - a near-post finish and a back-post clinical header."

After a poor first-half showing versus Hibs last Saturday, McCall saw his side go in trailing at the interval again.

"I was disappointed to go in at half-time 2-0 down," he told Motherwell's club website.

"It was an open game, we had opportunities and hit the woodwork and failed to hit the target on other opportunities.

"The last 30 minutes was just a siege, they brought big Lee Mair on, brought David van Zanten on.

"I don't think they could have brought any more defenders on."