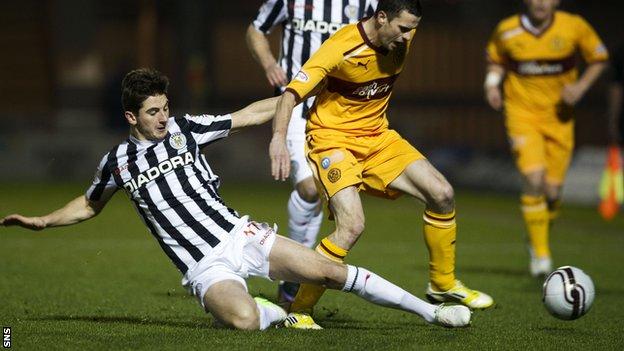 St Mirren manager Danny Lennon has conceded Kenny McLean might only have a few games left with the Paisley club.

"I certainly know that there's a lot of interest shown in Kenny - I knew there was a few here tonight," Lennon told BBC Scotland.

"All I can say on that one is I certainly know that he's going to be with us for the next three games."

St Mirren fans worried about the potential loss of McLean can be encouraged, however, that Lennon has his eyes on a couple of players he hopes to bring into the club.

One of those is English forward Dom Dwyer, a former Norwich City youth player who is currently playing in America with Sporting Kansas City.

"Dom Dwyer's been up and we're in constant dialogue with the MLS at this minute in time in trying to get a loan term deal set up," said Lennon.

"We are looking in another area.

"With Paul Dummett up here, we've got a good affiliation and relationship with Newcastle United.

"We've had a lad up over the last 10 days and he's done very well. He's someone that can certainly come in and give the group a helping hand."

It was only their second win in their last 11 league games and they now move above Ross County into 10th spot.

"He's exciting, isn't he!" said Lennon. "He's a joy to watch and he's maturing game by game, week by week, day by day.

"The only thing that's missing from his game now is a finish, but he's getting ever so close there."