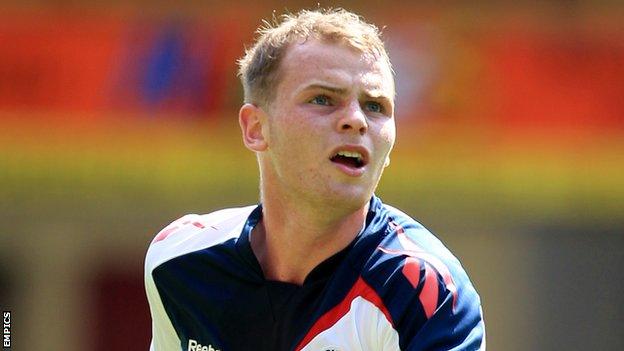 Mark Connolly is relishing his run of games in the Crawley Town first team.

The 21-year-old defender has started the last five games, with Claude Davis and Kyle McFadzean missing through injury and illness.

Connolly told BBC Sussex: "That's the reason for coming to Crawley - to get a chance and get playing.

"I knew it wouldn't be easy when I came here, or that I'd push someone aside and take their place. It has taken time so I am delighted."

We are six points behind the top of the table team. For a team that has just come up from League Two that is a massive achievement

The Ireland Under-21 international has made 20 appearances in all competitions since joining the Reds on a free transfer this summer.

"It's been difficult but luckily enough I've got my chance," he added.

"It has given me so much confidence and I am enjoying every game."

Crawley welcome Sheffield United to the Broadfield Stadium after ending a run of seven League One games without a win at Stevenage last weekend.

"It was a big relief," Connolly continued. "We knew a win was coming but it was just [a question of] when. It was like a new dressing room after the game.

"Sheffield United at home is massive. I remember watching them when they were in the Premiership.

"It shows you where Crawley has come from and the achievements the club has made to get from non-league to tenth in League One.

"We are six points behind the top of the table team - for a team that has just come up from League Two that is a massive achievement. We are enjoying every minute."

Meanwhile Reds defender Charlie Wassmer has left the club after having the remainder of his contract paid up.

The 21-year-old joined Crawley in March last year and went on to make 27 appearances for the club in all competitions.