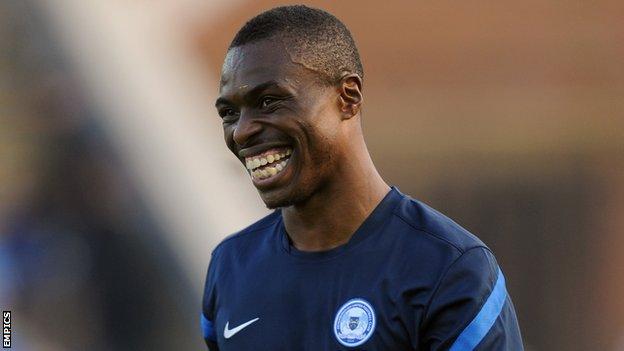 Posh manager Darren Ferguson said he will have to talk to the 26-year-old.

Ferguson told BBC Radio Cambridgeshire: "He's got to understand he's just got back in the team and he'd be missing three or four weeks.

"At the end of the day we all have to do what's best for Peterborough."

Zakuani, who won his single cap seven years ago, tweeted his delight after learning of his inclusion in DR Congo manager Claude Le Roy's provisional squad of 41 on Thursday.

That squad must be trimmed to 23 before the start of the competition on 19 January.

He's got to understand he's just got back in the team and he'd be missing three or four weeks. We all have to do what's best for Peterborough

"I think if he was to make the final squad, of course you are happy for your player because it's a big international tournament," reasoned Ferguson.

"But at the end of the day we all have to do what's best for Peterborough, it's a simple as that."

Zakuani was one of four Posh players punished by Ferguson for going out in Peterborough city centre last month. The others, Tyrone Barnett, Emile Sinclair and Nathaniel Mendez-Laing, have all left the club on loan following the incident.

The former Leyton Orient and Fulham defender was initially transfer-listed and fined, but the sanctions were reversed following the involvement of the Professional Footballers' Association.

And Zakuani has since forced his way back into Peterborough's starting line-up, playing a major part in last Saturday's victory at Cardiff - the first time the Welsh club has dropped points at home this season.

"I think it's good Gabby is in that squad because he hasn't played a lot of football, and I thought against Cardiff he was excellent, he really was," said Ferguson.

"There were reasons, and he's the first to admit he perhaps didn't have the best of starts to the season - there was a change of formation which perhaps suited other players, but he can play in the centre, there's no doubt about that, and hopefully we'll get more performances like that at Cardiff."

"I think he knows me deep down and what sort of person I am, that I'm a good guy, and I know everything about him," he said.