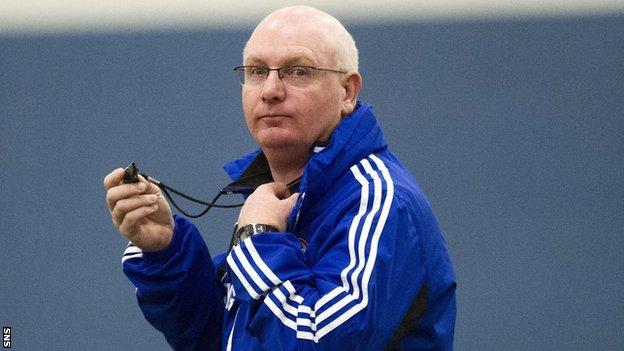 Manager John McGlynn says Hearts will "challenge" the extension of their transfer embargo.

Hearts, who had already been banned from registering new players due to late payment of player wages, thought the suspension would be lifted.

The players are not concerned by this at all

But the Scottish Premier League say the club have "not paid a number of bonuses and appearance".

"It's difficult to talk about it because we're going through lawyers," said McGlynn.

The club were initially placed under a 60-day transfer embargo in October for failing to pay their players and some staff their monthly wages on time for two consecutive months.

That sanction was due to end on December 23 and its extension effectively ends the prospect of a deal for Lithuanian striker Arturas Rimkevicius, who arrived last week on trial.

BBC Scotland has learned Hearts, who are now up to date with salary payments, will fight their case on the grounds that there is no fixed date in players' contracts for when bonuses or appearances have to paid.

And he revealed that bonuses at his previous club, Raith Rovers, were only paid out at the end of the season.

"There are other clubs who don't pay their bonuses until the end of the season either," he added. "That's why this can be challenged.

"The board of directors have looked at it and went to get legal advice. They want to take that a stage further.

"This has not come from the players. The players are not concerned by this at all."