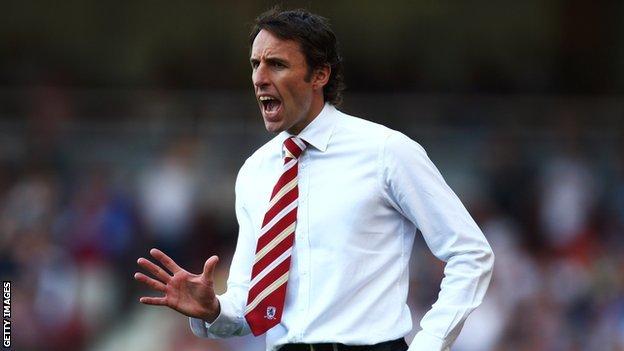 Former Middlesbrough boss Gareth Southgate says he still has plans to go back into management.

The 42-year-old spent three years as Boro manager after his playing career ended and admits he lacked experience.

But now he has completed his badges, he says he would consider coaching youngsters as a route back in.

Southgate told BBC Sport: "At some point I will probably have a point to prove to myself that I can go and manage a football club again."

The former Crystal Palace, Aston Villa and Middlesbrough player also said he turned down a technical director role at the Football Association because he thought he was too young and the position lacked power.

Southgate, who now works as a TV pundit and coaches at different levels, caused controversy when he was appointed Middlesbrough boss in 2006 despite not having the necessary qualifications to coach in the Premier League.

The former England player, who earned 57 caps for his country, was given special dispensation and kept Boro in the top flight for two seasons but following relegation, Southgate was sacked despite leading his side to fourth in the Championship.

Now he realises that the opportunity came too soon and he was symptomatic of a problem where many professional players in England believe they can step straight into management.

Speaking at the World Football Academy conference at the Emirates Stadium, Southgate took part in a discussion with Raymond Verheijen, where the former Wales and Russian coach pointed out that former Dutch players built their coaching foundation in youth teams.

Southgate said: "I've got three years' Premier League management experience but I've gone back and coached kids because I wanted to increase my knowledge of coaching.

"The route that I ended up going, I'm stronger and better prepared for it, but it would probably have been a bit less painful doing it another way."

Southgate recently finished a spell as the Football Association's elite development director but says he did not have the credentials for the technical director position, now given to West Brom sporting director Dan Ashworth.

The former England defender also believes the position is limited in its powers and Ashworth will need significant help to make it work.

"My feeling is that [the technical director] should have been someone with more coaching experience than me," he said.

"And also the fact that the FA don't control youth development because the clubs run the academies and the Premier League oversee that.

"I think you would be held accountable for things that you don't control and I wasn't comfortable being in that situation."