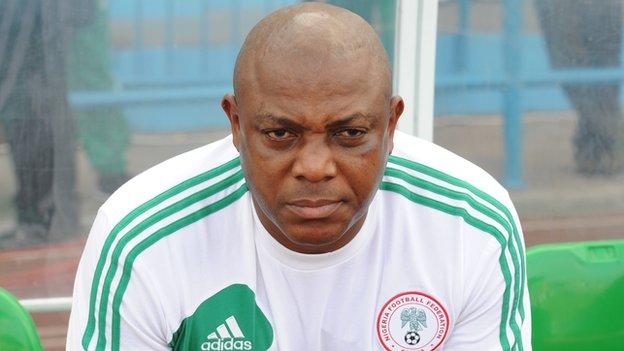 The Nigeria Football Federation has revealed it owes coach Stephen Keshi two months' salary - just weeks before the start of the Africa Cup of Nations.

Keshi, a former Nigeria international, has yet to make an official complaint about the non-payment.

And he is currently preparing for the tournament in South Africa, which takes places from 19 January to 10 February.

"It's a situation that is unfortunate but we are working to sort it out," said NFF president Aminu Maigari.

"It's not true that he is being owed six months salary. We will ensure he gets the two month salary due to him."

Keshi's situation is even more dire as is he still waiting for his official car and apartment, more than a year after he took over the job.

The NFF, which receives its funding from the sports ministry, has acknowledged the debts owed to the coaches but says they will have to be patient.

"The apartment and car issue has been discussed," Maigari told BBC Sport.

"It's all part of the agreement [car and apartment], we appreciate that the coach has been very understanding but we won't take that for granted.

"No-one is happy that we are in this situation, that the coaches remained quiet about it shows a strong maturity

"Now, it is our job to sort everything out as soon as possible and we will."

It is not the first time Nigerian coaches have been not been paid.

Meanwhile, Nigeria will field a team drawn from the Nigeria Premier League for their 2 January friendly against Catalonia.

According to NFF spokesman Ademola Olajire, the game against Catalonia will be used to select the locally based players that will be included in the country's final 23-man Nations Cup.

Players from the NPL who failed to make the final cut will then return to the country after the game.