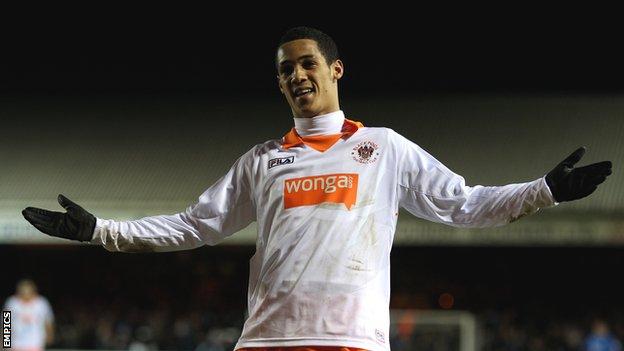 Blackpool manager Michael Appleton says Liverpool have contacted the club about re-signing winger Thomas Ince, but has denied that a deal is already in place.

a year and a half after he left Anfield.

Appleton told BBC Radio Lancashire: "I think there's been a conversation between (chairman) Karl Oyston and Liverpool about an offer.

"But as far as I'm aware, it's way below the type of money we'd expect for someone of Tom's talent."

Appleton confirmed that Ince, who has been struggling with a hamstring injury suffered in is available to take part in Blackpool's festive fixtures.

"He'll continue to play as long as we hold his registration," he said.

"I wouldn't say I'm resigned to losing him just yet though. There's still a lot of work that we feel has to be done before anything like that happens."

Ince, who came through Liverpool's youth system and made one substitute appearance for the club in a League Cup tie, has risen to prominence since joining Blackpool in August 2011.

He scored eight goals for the Tangerines last season, including one in their Championship play-off final defeat by West Ham at Wembley in May.

Ince, the made his debut for the the England Under-21 side in September and has won a total of five caps.

Newly installed manager Appleton said in November that and does not think the speculation will affect his future performances or his commitment to Blackpool's cause.

"He's a down-to-earth, sensible young lad," continued the former Portsmouth boss. "Having someone like his dad in his family, who has been a footballer himself and knows the ups and downs of the game, I'm sure he'll put a decent performance in [against Wolves on Friday].

"I just want to make sure that he's fully concentrating on training and games. If he does that, I'll leave him be.

"He knows where my office is and he knows that if he wants to speak to me at any time, that's not a problem."