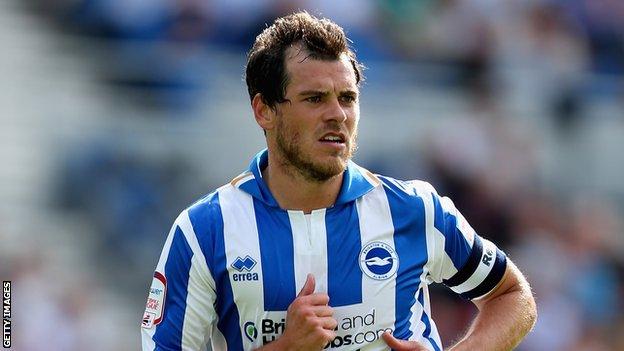 Brighton captain Gordon Greer says they will have to improve their results at home if they want to remain in the hunt for a Championship play-off place.

The Seagulls have drawn half of their 12 league games at the Amex Stadium this season.

The centre-back told BBC Sussex: "A lot of teams come to the Amex, sit in and make it difficult for us.

"The points we've picked up from the home games are not as good as the performances have been."

Brighton lie eighth in the Championship table and are three points off Millwall, who occupy the final play-off spot.

The 32-year-old added: "It's there for everybody to see.

"We should have a few more points on the board but it is up to us to keep the performances going and hopefully get the results.

"Away from home there is more emphasis on the home team to come at us.

"We are still in a decent position so it is not all doom and gloom."

This weekend Albion travel to Blackburn Rovers, who were relegated from the Premier League last season.

Greer spent two years with the Lancashire side from 2001 until 2003 but found first-team opportunities extremely limited, making just one start in that period.

However he says his spell at Ewood Park was worthwhile.

"It seems like such a long time ago that I was there," the Scot continued.

"I'd played for Clyde in Scotland and went to Blackburn, who'd just got promoted to the Premier League, and it was a massive jump.

"It is a really good club and I learnt a lot there.

"It was a time for me where I learnt a lot about professionalism. I leant a lot about diet, the lifestyle I should be living and stuff like that.

"It was disappointing I didn't play more but at the time they had a fantastic squad. It was more a learning curve.

"I know a couple of the boys there and the manager [Henning Berg] so it will be nice to see them."