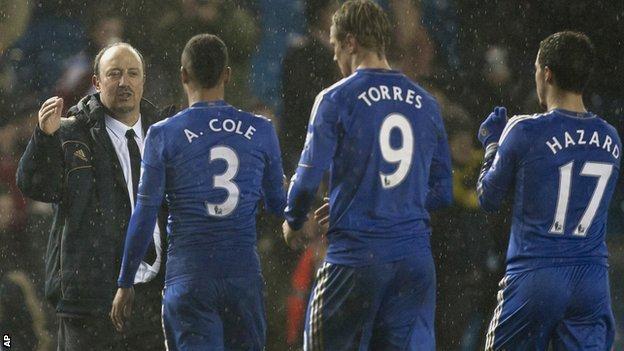 Chelsea interim boss Rafael Benitez says his team are moving in the right direction after they beat Leeds 5-1 in the Capital One Cup quarter-finals.

"I thought the performance was fantastic, not just the second half but the first half as well," said Benitez.

"You can see that in every game the team is a little bit stronger."

The 52-year-old Spaniard was appointed temporary Blues boss following the sacking of predecessor Roberto Di Matteo at the end of November, an appointment that proved unpopular with Chelsea fans.

His side lost the Club World Cup final to Brazilian side Corinthians on Sunday and were struggling at the break at Elland Road, having fallen behind to a Luciano Becchio goal.

But a superb second-half showing saw them hit five unanswered goals, with Juan Mata, Branislav Ivanovic, Victor Moses, Eden Hazard and Fernando Torres on the scoresheet as the Blues booked a semi-final against Swansea.

"At half-time I told the players to keep doing the same things - keep the ball, play a high tempo, press and when we are in possession pass the ball as quickly as possible," said Benitez.

"The Leeds keeper did really well. And with the rain we had to adapt to the pitch. But it is just a matter of time and confidence and trying to play the game we wanted to play."

Benitez said he was particularly pleased with the effort of his players following their exertions in Japan at the weekend, with seven of the team who started Wednesday's game having played against Corinthians.

"The reaction of the team in the second half was fantastic after coming back from Japan with jet lag and changing some players," added Benitez.

Leeds boss Neil Warnock said he was proud of his side despite the defeat and felt two moments either side of half-time - a missed header by his defender Tom Lees and Mata's equalising goal were key to the outcome.

"We had our opportunities. We played some great stuff and, at 1-0, if Tom Lees' header goes in just before half-time it is a different ball game for them," said Warnock.

"Going in 1-0 at half-time you knew we needed to be strong early on in the second half and look what happens - Jamie Ashdown makes an error and world-class players punished us after that.

"It was almost a relief to them to get back into the game and it gave them a huge lift. We couldn't cope.

"But the crowd were great and if Leeds sort themselves out that atmosphere is what it should be like week in, week out."