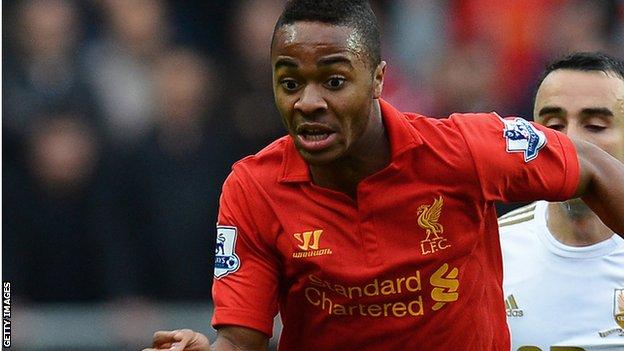 Raheem Sterling says he is only going to get better after signing a new five-year deal at Liverpool.

Sterling, who was previously on a £2,000-per week youth contract, will see his earnings initially jump to around £30,000-per-week.

The 18-year-old won his first England cap this season and established himself in manager Brendan Rodgers's team.

"There's a lot more to be done. As the manager has said, I haven't begun yet," Sterling said.

"It's every 18-year-old's dream. I'm just really grateful to be at such a big club like this," he told the club website.

"Hopefully I can kick on after the new year and try to do my best for the team and the football club."

Manager Brendan Rodgers did warn Sterling that he must continue to improve.

"I always congratulate players when they sign a new contract and then I warn them," he said.

"I tell them they need to decide after this contract whether there is going to be another contract at one of the biggest clubs in the world, or whether it will be at a different level.

"There is a lot of development and a lot of nurturing to go yet."

Sterling's earnings will rise over the course of the deal to bring him in line with a number of senior players whose place the teenager has taken.

The former QPR trainee turned 18 earlier this month and Rodgers had repeatedly stressed his fear that too much, too soon might harm the player's development.

His contract situation was complicated by the lucrative salaries earned by Joe Cole, who earns more than £100,000-a-week, and Stewart Downing, who earns about £60,000-per-week, despite not being regulars in the Liverpool first team.