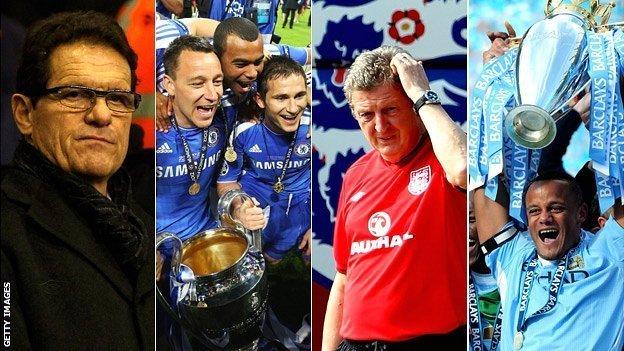 The drama of the 2012 footballing year was encapsulated in the words of an emotionally drained Manchester City fan celebrating their Premier League title win.

It was a crown claimed with virtually the season's final kick as Sergio Aguero scored the second of two stoppage-time goals to beat Queens Park Rangers and snatch the championship away from Manchester United.

"I can't go through that every 44 years," said the blue-clad supporter, still unable to grasp the full scale of the events that had unfolded in the May sunshine at Etihad Stadium to give City their first title since 1968.

This has been a remarkable year. From a title won in the closing seconds, to the shock resignation of England coach Fabio Capello and the rise and fall of Roberto Di Matteo's eventful eight months as Chelsea manager.

Roy Hodgson's career reached its zenith when he succeeded Capello and took charge of England at Euro 2012 in Poland and Ukraine, overseeing a campaign that was respectable rather than spectacular and ended in familiar fashion, beaten in the last eight on penalties by Italy.

Even the sport's undercard produced abundant drama, reflecting the fierce demands that must be dealt with in modern football's environment.

Kenny Dalglish, handed the post of Liverpool manager permanently for a second spell following a caretaker stint, was sacked after one season by the club's American owners despite winning the Carling Cup and reaching the FA Cup Final.

Tottenham, meanwhile, dismissed Harry Redknapp despite finishing fourth in the Premier League and only being denied a return to the Champions League by the almost freakish circumstances of sixth-placed Chelsea's triumph in that competition against Bayern Munich in their own Allianz Arena.

In the international game, England started the year moving comfortably towards Euro 2012 under Capello - only for the Italian to effectively be brought down in February by the Football Association's decision to strip John Terry of the national side's captaincy.

Capello's reign was closely aligned with Terry's fortunes, having restored the Chelsea defender to the captaincy after taking it away from him in February 2010 amid allegations of a relationship with the former partner of a one-time team-mate.

The FA took away the armband once more as Terry awaited trial on allegations he had racially abused QPR defender Anton Ferdinand during a game at Loftus Road - he was later cleared in court - but Capello felt this was a point of principle for which he was prepared to sacrifice his job.

Capello publicly questioned the move on Italian television and was gone after a meeting with the FA hierarchy lasting a little more than an hour just days later.

It was a messy, unsatisfactory conclusion to the Italian's tenure. Capello felt his authority had been undermined fatally and a reign stretching back over four years was over.

There was even an element of surprise about his successor. Redknapp was regarded as a racing certainty to step into the role, especially as he had been cleared of tax evasion charges just hours before the Italian vacated his desk at Wembley.

Instead, after due consideration by the FA, West Bromwich Albion manager Hodgson was approached and duly appointed.

England returned from the Euros with their reputation intact rather than enhanced, although the manner in which they mixed with the local community in their Krakow base left an enduringly good impression.

The campaign itself saw an opening draw with France and victories against Sweden and co-hosts Ukraine before a tiring squad hung on through extra-time against a vastly superior Italy before going out in the shoot-out.

The tournament was given the conclusion it deserved as Spain became the first country to win three successive major tournaments. Their campaign was a slow-burner but a glittering performance in the 4-0 win against Italy in the final in Kiev confirmed their status as the world's outstanding side.

Since then Hodgson has embarked on the campaign to get England to the World Cup in Brazil in 2014 with wins against Moldova and San Marino and draws with Ukraine and Poland. They face a tough test away to group leaders Montenegro in March that will do much to shape their fortunes.

Hodgson is also taking a new, younger group of players with him into the future, with emerging talent such as Liverpool's Raheem Sterling, Crystal Palace's Wilfried Zaha, Spurs' Steven Caulker, Arsenal's Carl Jenkinson and fit-again Gunners midfielder Jack Wilshere figuring in the 4-2 loss in Sweden.

Chelsea's win in the Champions League ranks among the year's most outstanding achievements, accomplished in adversity, on opposition territory and amid the by-now customary managerial upheaval at Stamford Bridge.

Di Matteo started the season as right-hand man to Andre Villas-Boas then replaced him on an interim basis when the Portuguese was sacked after only nine months in charge. It was early March and Chelsea already trailed 3-1 to Napoli after the first leg of their last-16 tie in the Champions League.

Di Matteo transformed their fortunes, united a discontented squad and gave owner Roman Abramovich the prize he wanted above all others.

Rafael Benitez took over at Chelsea from Roberto Di Matteo but could not save Roman Abramovich's European Champions exiting the Champions League at the group stage.

Napoli were beaten, as were Benfica, before a towering win over two legs against Barcelona in the semi-final. Didier Drogba's goal secured a narrow first-leg lead and Chelsea survived a Barcelona siege, and the first-half sending-off of captain Terry, to earn a magnificent draw and a place in the final.

The final provided a fitting conclusion to this unlikely story. The odds seemed stacked against Chelsea with Bayern playing on their own ground - but this was the year when destiny looked to be guiding the Londoners over the finishing line.

Thomas Mueller gave Bayern a late lead. It was still not enough and the talisman Drogba equalised with a header two minutes from time and ended Chelsea's quest to win the Champions League with his final kick for the club, the decisive penalty in the shoot-out.

The Champions League secured Di Matteo the manager's job on a permanent basis but was also to finish him off, sacked hours after a 3-0 loss to Juventus in the group phase of his side's defence of the crown.

Former Liverpool boss Rafael Benitez was controversially appointed, again as interim manager, but he could not prevent Chelsea becoming the first holders to fail to reach the last 16.

Abramovich's decision to turn to Benitez, at least temporarily, was highly contentious and greeted with an angry response from many supporters who jeered him loudly when he appeared for his first game in charge at home to Manchester City.

The Spaniard was viewed with derision following his rivalry with Chelsea, and Jose Mourinho in particular, from his time as Liverpool manager when he won two Champions League semi-finals and an FA Cup semi-final against "The Special One" and was always happy to engage in the verbal mind games with his opposite number at Stamford Bridge.

Di Matteo had already won the FA Cup with a 2-1 win over Liverpool at Wembley, Anfield boss Dalglish failing to add a second trophy to the Carling Cup won on penalties against Championship club Cardiff City.

Barcelona forward Lionel Messi broke the record for the most number of goals scored in a calendar year netting 91 for club and country. He beat German Gerd Mueller's tally of 85 set in 1972.

It was a defeat that only confirmed the conviction of Liverpool's owners, the Fenway Sports Group, that Dalglish was not the man to move the club forward. Even an FA Cup victory, it seemed, would not have been enough to save him from dismissal.

Dalglish can rightly point to having brought silverware back to Liverpool after a six-year absence, but he was heavily criticised for the failure of expensive signings such as £35m Andy Carroll and Stewart Downing at £20m to repay his vast investment.

Liverpool, and Dalglish, were also condemned for their vociferous public defence of striker Luis Suarez after he was accused of racially abusing Manchester United's Patrice Evra - for which the Uruguayan was banned for eight matches and fined £40,000 by the FA.

If Chelsea were in at the end of Dalglish's reign they also helped seal Redknapp's fate at Spurs. They could only finish sixth in the Premier League but replaced fourth-placed Spurs in the Champions League as the new holders.

That led to the parting of the ways between Spurs chairman Daniel Levy and Redknapp - later to replace Mark Hughes as QPR boss. Brendan Rodgers moved from Swansea City to Liverpool as Dalglish's replacement.

As the season moves into 2013, there is still plenty of opportunity for more drama as last season's main protagonists Manchester United and Manchester City once again set the pace in the title race. It will take some doing, however, to top the events of the final day of last season.