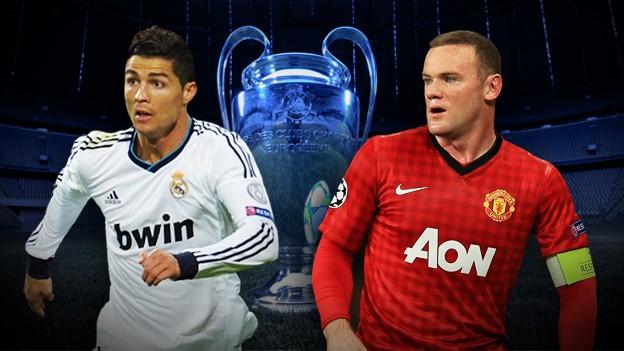 Manchester United have been drawn against Spanish champions Real Madrid in the last 16 of the Champions League.

The match will see Cristiano Ronaldo return to Old Trafford for the first time since his £80m move from United to Real in June 2009.

Borussia Dortmund have been drawn against Shakhtar Donetsk and Porto take on Malaga, while Galatasaray will play Schalke.

But the undoubted tie of the round sees nine-times winners Real take on United for the first time in nine years.

The sides last met in the 2002-03 quarter-final with the Spaniards triumphing 6-5 on aggregate.

Real won the first leg of that tie 3-1 and went through after a virtuoso second-leg performance from the Brazilian Ronaldo, who scored a hat-trick and was applauded off the Old Trafford pitch, as United won 4-3.

United club secretary John Alexander said: "Out of several stand-out ties, I think this is the one. If history has anything in our favour our one [aggregate] victory against Real Madrid in this competition was in the season when we won the final at Wembley [in 1968]."

Real Madrid director Emilio Butragueno said it would be a special match for the two managers, United's Sir Alex Ferguson and Real's Jose Mourinho, who will meet for the 15th time in the first leg.

"I know the coaches have a great relationship," he stated. "Sir Alex Ferguson knows how to get the best out of his players and they have top players, but we are Real Madrid and we will try our best."

In 14 previous matches as manager of Porto, Chelsea and Inter Milan, Mourinho lost just two games against United, with six being drawn.

Mourinho first took on Ferguson in the Champions League round of 16 in the 2003-04 competition, leading his Porto side to a 2-1 home win before snatching a draw in injury-time at Old Trafford to spark a manic touchline dash.

The duo met 10 times when Mourinho was manager at Chelsea and their latest games came in the 2008-09 Champions League when United knocked Inter Milan out of the competition with a 2-0 aggregate win.

As group winners, United will again play the second leg of the tie at home.

Celtic and Arsenal, as group runners-up, will play their first legs at home.

Hoops manager Neil Lennon is looking forward to a "beauty" of a tie against Italian champions Juventus.

"In terms of glamour it's a beauty," he said.

Meanwhile, Bayern chairman Karl-Heinz Rummenigge is optimistic his side will see off Arsenal.

"We enter this match as the slight favourites but we can make the mistake of underestimating them," said the German.

Champions League round of 16 draw: