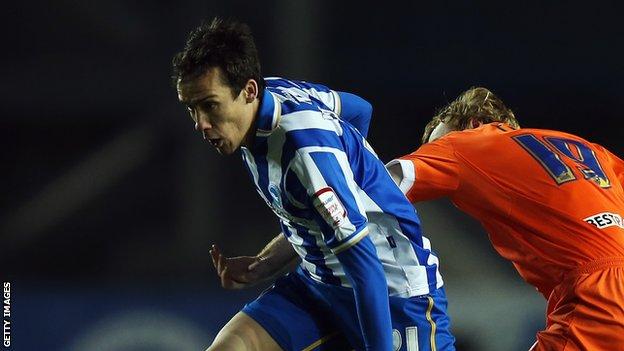 The 30-year-old scored his first goal for the club from the penalty spot to secure a point - as well as playing three different roles during the game.

"He played in positions that we needed him to do for us and he didn't complain," Poyet told BBC Sussex.

"He played on the right wing, the left side of midfield and at right-back. (And) He had an unbelievable penalty."

He continued: "I am pleased for David because he has had to wait for his chance. He took responsibilities, played the ball well and moved well.

"Somehow I couldn't play him and now he has proved he can be very important for us.

We had already talked and decided it was my responsibility if I was on the pitch. There wasn't one moment's doubt and I took it

"Kazenga LuaLua probably changed the game with his impact [scoring Brighton's first goal] but I think the man of the match was David Lopez."

Spaniard Lopez has made nine appearances for the Seagulls since joining on a free transfer in August, four of those from the substitutes bench, and said he had adapted well to living in a new country.

"Everyone here has been very helpful and it hasn't been a problem, I've trained well and it is a decision for the manager (when I play)," he continued.

"I am very happy with the club and the team. We will keep fighting to achieve our objectives."

Albion have missed three penalties this season, but Lopez was unfazed by the pressure when they were awarded an 88th minute spot-kick against the Lions.

"We had already talked and decided it was my responsibility if I was on the pitch," the former Athletic Bilbao man said,

"As I was out there, there wasn't one moment's doubt and I took it."

Poyet added: "I was quite confident because I know he is very good.

"At the moment at the club we have two penalty takers; him and Dobbs [Stephen Dobbie].

"You cannot play like in American football and have a player come on, take a penalty and then come off.