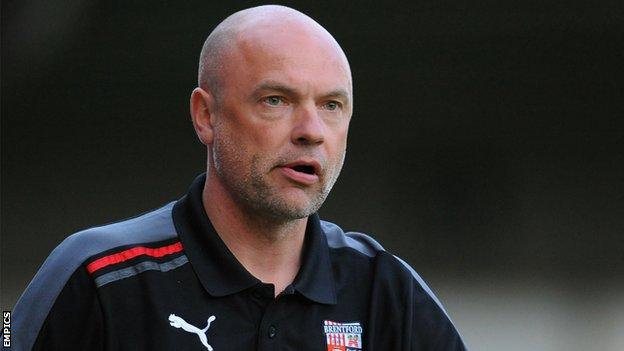 Brentford manager Uwe Rosler has criticised the Football Association after beating Bradford City in their FA Cup second round replay.

The tie had to be re-arranged after the Bantams were expelled from the competition but then reinstated.

He told BBC London 94.9: "The FA put us in a very difficult situation but we overcame it. We didn't like it.

"We feel we are the club punished in the end by people who did not make careful decisions in the first place."

Bradford were thrown out of the Cup for fielding an ineligible player, on-loan Newcastle defender Curtis Good, in the original match between the two sides, which ended in a 1-1 draw.

However, the League Two side appealed against the decision and were let back into the competition.

I would have had no problem had Bradford stayed in the Cup in the first place. The FA throw them out then reinstate them and only fine them £1,000. It makes no sense

Brentford chief executive Mark Devlin said the club were "a little perplexed" by the FA's U-turn but had to accept the decision.

"I respect the FA very highly and think it is a fantastic organisation with a long history and great people working there," Rosler continued.

"But I am employed by Brentford Football Club,

"I would have had no problem had Bradford stayed in the Cup in the first place.

"They throw them out, then reinstate them and only fine them £1,000. It makes no sense."

The replay, originally scheduled for last week, was re-arranged and played on Tuesday night, with Brentford winning 4-2 after extra time.

Rosler said the timing of the game ahead of a busy festive programme will do no favours for his side, who are currently chasing promotion from League One.

"We didn't want the game and I don't think [Bradford manager] Phil Parkinson really wanted the game," the German added,

"But we had a very good outcome and it is very important for us to keep our run going."

Brentford will now face a trip to Southend United in the third round.