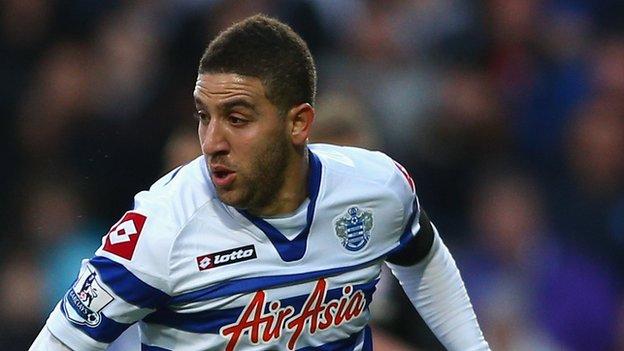 QPR midfielder Adel Taarabt has told his manager Harry Redknapp he wants to play for Morocco at next year's Africa Cup of Nations in South Africa.

If the 23-year-old is selected to play in the tournament, which takes place from 19 January to 10 February, he will miss key games for his club.

He said: "Harry has asked me not to go but I told him, 'If they call me, I can't refuse, boss. I love my country'.

"I warned him that the only solution was that the coach doesn't call me up."

Taarabt has been out of favour with Morocco recently but is desperate to impress national team coach Rachid Taoussi, who took charge in the summer.

He could miss Premier League matches against West Ham, Manchester City, Norwich and Swansea - as well as FA Cup matches.

"I will do everything I can to prove to him that I deserve to be there," Taarabt told the African football blog on L'Equipe.

"The coach isn't obliged to take me. I hope to be at the African Nations Cup but even if I'm not there, and that would be painful, I will be the biggest Morocco supporter."

Redknapp last week revealed he had asked Taarabt to miss the tournament to stay and help struggling QPR in their battle to avoid relegation from the English Premier League.

Taarabt scored twice as QPR beat Fulham at the weekend to register their first Premier League win of the season.

He has excelled under Redknapp since the former Tottenham manager replaced Mark Hughes at Loftus Road, and is delighted to be reunited with the boss he played under briefly at White Hart Lane.

Former Spurs player Taarabt said: "He is a peerless motivator. You believe you are the best player in the world when he talks to you.

"Before matches he is very strong. When you go on the pitch you fear nothing. At the end of the match against Fulham, he came to me to say, 'I told you that you were as good as Berbatov'."

Taarabt has been linked with a host of major clubs but stressed he is in no hurry to leave QPR.

He said: "I see all the clubs linked with my name but I've just signed for four years at QPR. The chairman has said that he wouldn't sell me. I don't know what would happen if someone offered 20 million.

"But I love the club and the fans. And they love me too."