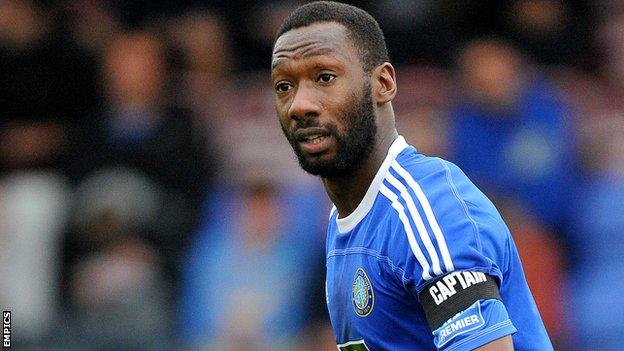 The Football Association has confirmed that it will investigate allegations of racist abuse aimed at Macclesfield captain Nat Brown by Barrow supporters.

Speaking after the FA Cup second round tie at Holker Street, which Macclesfield boss Steve King complained that Brown had been called "a monkey".

The incident was included in referee David Webb's report.

"It's just unacceptable and it will be looked into," Barrow chairman Brian Keen told BBC Radio Cumbria.

"The results will be known to people once we find out who or what it was. We at Barrow won't have it and we will look into it really seriously."

King claimed defender Brown, 31, was the subject of racial abuse as he made his way onto the field for the second half.

He said: "He got called a monkey by some of the fans behind the goal. He said to the ref 'he's called me a monkey' and that's not acceptable.

"I heard it when I was coming out with Nat. It seems to be happening everywhere.

"It's up to 'Browny' [if he wants to take it further]. He said to leave it, but the referee wants to report it because it's not acceptable. We're in 2012 - what's all that about?"

Barrow assistant manager Ashley Hoskin was just as annoyed, adding: "I know the club will take a firm stance on anyone shouting what was allegedly shouted.

"It was their manager who came over and said that someone from the crowd had shouted something to one of their players.

This latest allegation of racism follows a series of other high-profile cases over the past year.

Former England captain John Terry was by the Football Association, but cleared of any criminal charges, following a clash with QPR defender Anton Ferdinand.

And several England Under-21 players were at a Euro 2013 qualifier in October.

The two Blue Square Bet Premier sides will meet again on Saturday, 29 December to determine who will face Championship leaders Cardiff in round three.