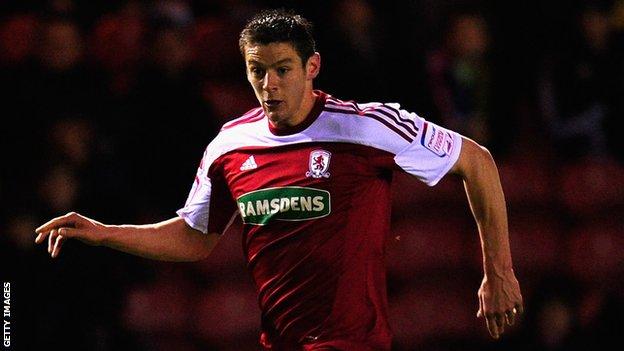 Lukas Jutkiewicz scored for the second successive game as Middlesbrough defeated an out-of-form Blackburn to move up to third in the Championship.

Former Everton striker Jutkiewicz, 23, scored the game's only goal in the second half with a clinical low finish.

Henning Berg's side have now won just once in 10 matches.

Both sides failed to make the most of their chances in the first half. Jutkiewicz shot over the bar from inside the area while striker Jordan Rhodes should have done better from close range for Blackburn in the 24th minute.

Jutkiewicz headed wide from close range, but he made up for that miss in the 67th minute. Scott McDonald pulled the ball back for Jutkiewicz on the edge of the area and he swept the ball into the net for his seventh of the season.

Blackburn have gained just one point from their last six games.

The visitors almost snatched a point in the final minute, but Rochina's free-kick was superbly kept out by Steele.

"We were in this position last year but we drew too many games that cost us, but we have learned from that.

"Today was tough for us. Blackburn may have only won one game in 10 but they have a lot of quality players and they play good football. They made it difficult for us and created some good chances.

"So it may have been a close run thing but we deserved it. It was a fantastic effort by the team, they dug deep and got a very good goal then worked hard to hold on to it."

"We played well - maybe for spells we played better than Middlesbrough - and we created chances but we lost 1-0.

"It is very frustrating but it has been like that for eight weeks now. We are playing well but not winning games.

"In football you have to take your chances. Middlesbrough created maybe two or three and scored. We created three or four or five but we are going away with nothing.

"People talk about luck and say that we hit the post but it is time for us to create our own luck, start taking chances and start winning games."