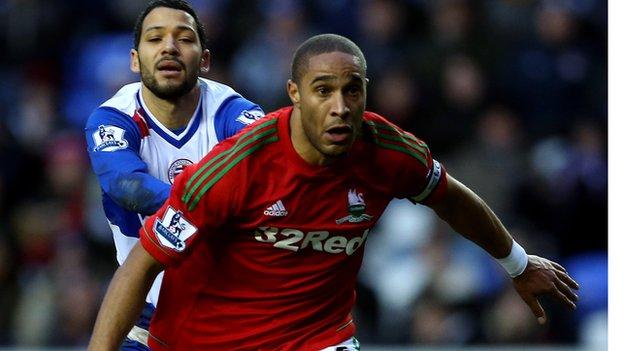 Reading lifted themselves off the foot of the Premier League table with a hard-earned draw against Swansea City at the Madejski Stadium.

The Royals did have the ball in the back of the net but substitute Adam Le Fondre's 74th-minute effort was ruled out for handball.

Swansea needed a goal-line clearance by Chico Flores to secure a point.

Swans striker Michu, the league's leading scorer with 13 goals, limped off late in the game.

Reading went into the game bottom of the table after seven straight defeats.

And they were on the back foot for the first hour until Le Fondre's introduction.

The striker energised the home team and looked to have scored a vital header. But the referee judged he had deliberately punched the ball into the net and booked him.

Swansea pushed Michu back into the Swansea midfield to accommodate Luke Moore's first start of the season.

Danny Guthrie was in the thick of the action early on, going down in the Swansea box after Flores was dispossessed by Pavel Pogrebnyak, but referee Mike Jones waved away the penalty appeals.

They offered little else in attack with lone striker Pogrebnyak looking isolated.

Swansea should have taken the lead on the half hour when Reading defender Chris Gunter chested the ball weakly towards his goalkeeper, but Michu lifted the ball over the bar from six yards.

The Royals gained in confidence after that, but never really threatened before the break.

The introduction of Hal Robson-Kanu and Le Fondre gave the Royals fresh impetus midway through the second half, and the latter was heavily involved as Michel Vorm was tested in the Swansea goal.

But it was the Dutch goalkeeper's opposite number Adam Federici who pulled off the stops of the game, saving brilliantly from Nathan Dyer's diving header and then holding on to a fierce shot by Ki Sung-Yeung.

There was real concern for Swansea when Michu limped off after an innocent-looking off-the-ball collision, but after the game manager Michael Laudrup said the injury wasn't serious.

Then Flores came to the Swans' rescue as he headed a goal-bound Le Fondre volley off the line.

QPR's defeat by West Brom means Reading move to 19th in the table but still six points behind 17th-placed Southampton.