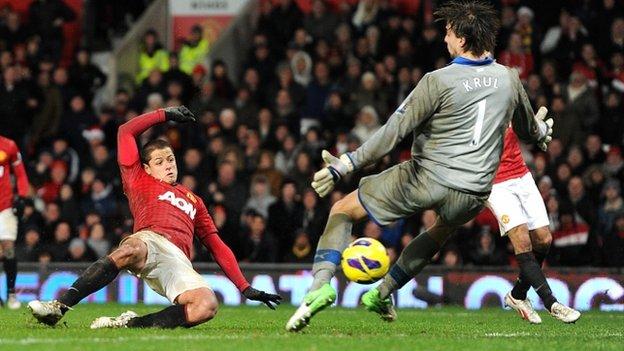 Manchester United extended their Premier League lead to seven points with a thrilling win over Newcastle.

James Perch pounced from close range to give the Magpies an early lead before Jonny Evans equalised in similar style then turned a cross into his own net.

Patrice Evra levelled matters with a low drive before Papiss Cisse's superb shot made it 3-2 to the Magpies.

Robin van Persie equalised with a drive before Javier Hernandez slid in to convert a cross in the final minute.

It was a remarkable finish to an extraordinary match which saw the home side come from behind on three occasions.

The result will be a bitter blow for Magpies manager Alan Pardew, although he will have been buoyed by the performance of his players, who came agonisingly close to defeating their opponents at Old Trafford for the first time since 1972.

All the ingredients were there for a potentially eventful match - Boxing Day and a rain-sodden pitch.

And with Manchester United fielding a side without ill and injured attacking trio Wayne Rooney, Danny Welbeck and winger Ashley Young, the visitors must have sensed the potential for an upset.

For the hardened travelling fans, some in traditional fancy dress, they were presented a glimmer of hope in the fourth minute when utility player Perch scored his first league goal after keeper David de Gea weakly parried Demba Ba's angled shot.

Newcastle settled into their rhythm while the league leaders repeatedly gave the ball away. They also looked short of ideas from open play, so when the equaliser came it was no surprise it was from a set-piece.

Van Persie delivered a free-kick from the right which was flicked on by Ryan Giggs to Hernandez, whose shot was saved but then turned in by Evans.

That was the centre-back's fourth of the season and he added a 'fifth' moments later, at the other end.

This time Danny Simpson crossed low into the Manchester United area and Evans turned in at the near post. The goal was initially disallowed after Cisse was flagged in an offside position, but the decision was overturned by referee Mike Dean following consultation with his linesman.

It left Manchester United manager Sir Alex Ferguson incensed and he appeared to continue his protests seconds before the restart.

His mood became more positive when Evra drilled in an angled shot from 20 yards that Tim Krul got a hand to but could not stop from creeping in.

The men in red now looked the more confident of the two, but 10 minutes later the match swung back in favour of Newcastle when Cisse smashed a brilliant first-time shot past De Gea from substitute Gabriel Obertan's cross.

But, once again, the Magpies' joy was short-lived when United broke soon after the restart and Van Persie scored at the second attempt after Krul had saved his initial effort. It was Van Persie's sixth goal against Newcastle in eight league matches.

Sir Alex Ferguson's men are not ones to settle for a point and, after having hit the post with a header moments earlier, Hernandez timed his run to perfection to guide home Michael Carrick's inch-perfect cross.