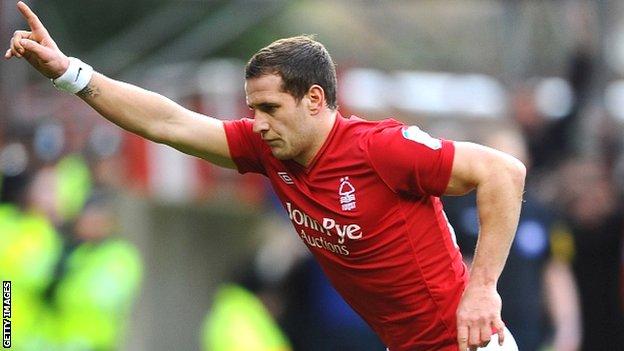 The home side had won only one of their last five and went behind when a Jerome Thomas cross was not dealt with and Paul Green tapped in from a yard out.

But Billy Sharp levelled from the spot and scored again after the break before Rodolph Austin sliced into his own net.

Neil Warnock's Leeds could have moved into the play-off places had they made it six wins out of seven, and they were the stronger side in the opening half an hour as Forest struggled to find any momentum.

The visitors went in front when Thomas crossed from the left, El Hadji Diouf poked the ball goalwards and it deflected into the path of Green, who was left with an open goal.

But Forest finally began to impose themselves and the hosts had already had two penalty appeals rebuffed when Sharp's turn was too clever for Tom Lees, who tripped him, and the striker sent Paddy Kenny the wrong way from the resulting penalty.

Forest continued to press in the second half and Sharp latched on to Blackstock's knock-down and showed great composure to round Kenny and guide his shot into the corner of the net to give Forest the lead.

Republic of Ireland midfielder Andy Reid provided some useful ammunition from set pieces and the flanks with his cultured left foot, and his right-wing corner led to the hosts' third.

When Ward returned the ball into the danger zone from the left it flew into the net off the outstretched boot of Austin, before Reid's perfectly flighted left-wing cross was emphatically headed home by Blackstock from 15 yards to make it four.

Substitute Somma tapped in Ross McCormack's cross from close range at the far post in the final minute and a goalmouth scramble might have provided a third for the visitors, but for all their recent success, Leeds slipped to a fourth defeat in their last five away games.

Forest's victory was their first home league win over Leeds since January 1996 and it took them above the Yorkshire side in an increasingly congested Championship table.

Leeds manager Neil Warnock said: "The equaliser gave Forest the lift they needed and we were guilty of being very amateurish and naive in the second half.

"If you concede three goals in seven minutes at any level you can't expect to win football matches, but at the end of the game I'm still disappointed that we have passed by another chance to win a game."