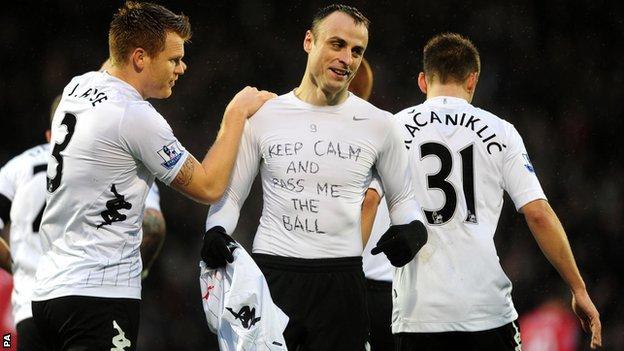 The home side took the lead early in the first half through striker Dimitar Berbatov, who hooked home after Kelvin Davis could only parry a cross.

It was all Southampton from then on, though, with Jason Puncheon and Lambert both close to equalising.

But they were not to be denied, and Lambert emphatically converted his penalty after Chris Baird's handball.

Brede Hangeland could have snatched all three points for the hosts with a header that drifted agonisingly wide in injury time, but that would have been harsh on the Saints.

With only one victory from their last 11 games, Fulham were markedly better than they were last time out, when Martin Jol's side were hammered 4-0 by Liverpool.

Steve Sidwell produced a resolute display in the middle of the park, tenacious in the tackle - something badly absent against the Reds - and Berbatov showed his class with his catalogue of touches, tricks and flicks.

After shipping 24 goals in their opening eight league matches this season, Nigel Adkins has shored up the Saints defence considerably.

The last five games have seen them concede only four goals, and this has coincided with them inching away from the relegation zone.

Dimitar Berbatov scored his fifth Boxing Day Premier League goal. None of his peers can beat him, but Jermain Defoe and Frank Lampard are level with him.

Missing the drive of skipper Adam Lallana in midfield, big-money summer signing Gaston Ramirez was unable to find any real cohesion with the lone front-man Lambert.

Fulham started much the brighter, with Sidwell flashing a shot narrowly wide, before they took the lead when goalkeeper Davis failed to deal with Sascha Riether's cross and Berbatov bundled home his sixth league goal of the season.

Saints responded well though, and their confidence was boosted when Jack Cork forced a neat save from goalkeeper Mark Schwarzer with a rasping drive.

Puncheon fizzed a low effort just wide and former Fulham man Steven Davis headed off target, as the visitors foraged for an equaliser.

The best opening fell to Lambert in the second half. The Englishman swung a left foot at Jose Fonte's flick-on, but saw his volley fly agonisingly over the crossbar.

And the pressure finally told as Baird deliberately handled in the box and Lambert smashed in the resulting spot-kick.

Sidwell came close in the dying minutes, as did Hangeland, but the Saints went home with a worthy draw.

"I am like a thunderstorm, I am very angry. Sometimes with myself and sometimes you can do something about it.

"Against Liverpool, I was angry because we didn't have the weapons to play with and that's even more frustrating.

"Today I thought if we played in the way we could play, we could make a difficult for them.

"We could have scored again as we had a couple of chances, but it is not enough. You will never hear me say it was enough to earn three points today because it wasn't."

"Any point picked up in the Premier League is an important one especially after going behind and we put the ball in good areas.

"We tried to get in good areas and go home with something. If you look at the second half I think we've had a good amount of possession, a few opportunities.

"We have good character in the team and good resolve, playing football in the right manner.

"We came with the mind-set of getting three points today and Kelvin Davis was very quiet in the second half and we looked like the team who would get anything.