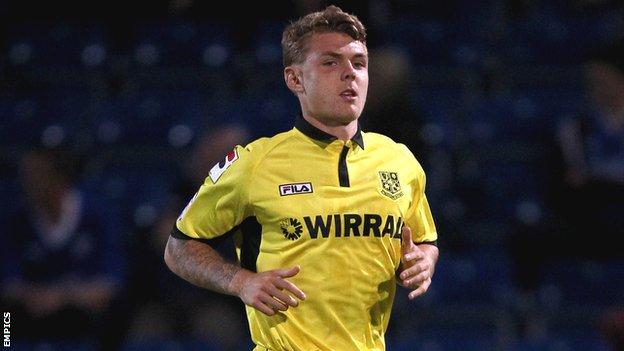 Max Power hopes to play a big part in Tranmere's festive programme after making his first start of the season.

The 19-year-old played in the and could be retained for Friday's trip to Swindon.

Thee midfielder told BBC Radio Merseyside that he has been content to wait patiently for his chance.

"James Wallace is the captain and he's been playing brilliantly all season. Liam Palmer has been the same, so I've just had to bide my time," said Power.

If we're still top in January, I think teams really will start thinking we're up there on merit, which we are, so let's hope it's meant to be.

Former Everton man Wallace is and manager Ronnie Moore hopes he will fit to return on Boxing Day, when the League One leaders host Crewe at Prenton Park.

It leaves Power competing with the experienced Danny Harrison to start alongside Palmer at the County Ground.

Tranmere remain top of the table, despite drawing their last four matches, and Power says Rovers are determined to prove their doubters wrong by staying in the mix for promotion during the second half of the season.

"I keep hearing people say that we're going to slip up and that we're there [at the top of the table] falsely," he continued.

"We haven't come up against a team that's outplayed us this season, and any defeats have probably been brought on by ourselves.

"We know what we can do and the manager has put a lot of confidence in us. If we're still top in January, I think teams really will start thinking we're up there on merit, which we are, so let's hope it's meant to be."