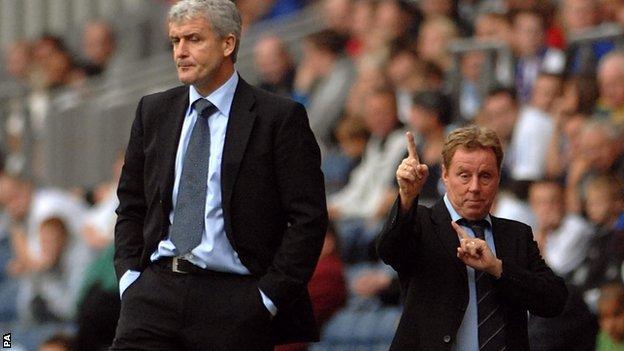 Redknapp replaced Hughes as manager of the Premier League strugglers in November, with the former having also held talks about becoming Ukraine boss.

"If he wasn't available, I'd probably have persevered with Mark, but Harry is a fantastic manager," said Fernandes.

"I've known him for years. Harry being available swung it for us."

QPR narrowly avoided relegation last season and had not won a league game in 12 attempts before Hughes was sacked with the team bottom of the Premier League.

Redknapp, who was sacked by Tottenham Hotspur in June, engineered Rangers' first top-flight victory of the season last Saturday, with the win over Fulham moving them off the foot of the table, although they are still second from bottom and five points from safety.

"We're all in this together. No shirking. Let's see what Harry and the boys do," added Fernandes.

"If we can pick up a couple of more wins before the new year, we're back to where we were this time last year.

"Coming off a win and three draws, there's a bit of renewed confidence about the place now."

Fernandes insisted he is "firmly committed to the club".

"Come what may, in May, we'll still be here," he added. "I'm not someone who's going to run away from things.

"There are still a lot of good things happening. The training ground is well on track and the stadium plans are progressing. We're hopeful of getting category two status in the academy.

"There's no change to our off-the-field strategy. There are lots of good things going on."