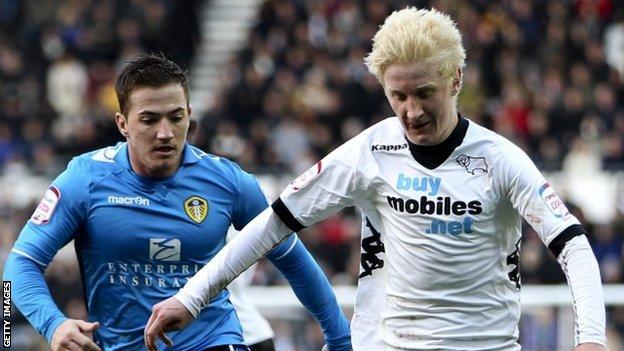 If reports are true and Barcelona have compiled a "detailed dossier" on Derby's 17-year-old midfielder Will Hughes then they must have filled a few pages on the back of his recent performance against Leeds.

Hughes was the deserved man of the match after tearing the Yorkshire side to shreds during Derby's 3-1 win in a match played in front of the television cameras earlier this month.

There was his wonderfully disguised threaded pass that led to Conor Sammon putting the Rams in front and a stand-out mazy run with the sort of tight control that hinted at a youth spent playing futsal. Countless times he knitted his team's play together; always finding space, always willing to take possession and shoulder responsibility.

In among the trickery and the attacking flair, what really caught the eye was a surging run back towards his own goal that eventually led to a sliding tackle - and with it the end of a promising Leeds attack.

It is the sort of form that has seen Hughes linked with a host of top-flight clubs and named as the Football League young player of the month for November.

Hughes was presented with his award at Derby's Moor Farm training ground on Thursday morning, his bleach blond hair standing out against the grey December sky.

It was his first award as a professional footballer and comes during a period of astounding progress for the modest and intelligent youngster.

Last season he made two substitute appearances and one start for the first team. So far this season he has started every Derby fixture apart from the away game at Bolton in late August when he came on as a substitute.

There has been no sign of the inconsistency that tends to affect many young players in their breakthrough season and his ability to last the duration of a match has improved throughout the campaign.

"'Just give him the ball', that is what we tell the lads," Derby boss Nigel Clough told BBC Sport. "They have the confidence to give him it all over the pitch.

"People say 'is he really only 17?'. It is like having a senior pro in the team. His composure belies his age and there are not many 17-year-olds in the country playing to the standard that he is; it sets him apart."

Hughes's instantly recognisably hairstyle might hint at a man keen to thrust himself into centre stage, but in conversation with him what stands out is his modesty and willingness to learn.

He loves to watch Spanish football, trying to pick out little bits from the likes of Xavi and Andres Iniesta, in particular their decision-making on the ball.

Ask him to describe his best qualities as a footballer and the answer comes slowly, Hughes eventually opting for his technical and passing ability. Ask him what he can improve and the answer flows - his weaker foot (right), which he is working on after training, the physical aspects of his game, his strength and his speed.

Hughes made his debut for the England Under-21 team in November as a substitute in their fixture against Northern Ireland. In doing so he became the second-youngest player to represent the U-21s after Arsenal's Theo Walcott.

Given that Hughes went into pre-season focused on claiming a regular place on the bench, it is unsurprising that he is still trying to come to terms with the speed of his progression.

"This season has been a whirlwind," said Hughes. "It is weird how fast everything has happened for me, I just could not see that. Over the last 12 months everything has rocketed. I still try to find time to keep in touch with my friends but it is difficult."

Hughes, a former pupil at Repton School, has just passed his driving test and has private tutoring at the club, studying A-levels in business studies and politics. He is trying to retain a sense of normality off the pitch.

Yet such has been his progress that he is already on his second professional contract - the initial deal he signed when he turned 17 quickly superseded by a new one in October that runs until 2015.

What they say about Hughes

"Will's technically a very sound player. He rarely gave the ball away in training or in the game he played [against Northern Ireland], which is vitally important at international level. He's progressing really well."

"For a 17-year-old to be playing in the first team of a Championship side is very unusual. I bet there are not many 17-year-olds playing at the level Will is week in, week out."

"To do what he has done at 17-and-a-half just goes to show the potential that he has got. "

The danger is obvious. Increasingly he is being linked with top Premier League clubs - Manchester United, Liverpool and Arsenal among others - and Clough is clearly aware of the need to protect his player, to monitor his development and keep him grounded.

"One of the biggest dangers is money," added Clough. "Once you put money into the hands of a 17-year-old, no matter how intelligent and mature they are, there is a chance of it going the wrong way."

Clough has told Hughes that if he can get this season and the next right, if he can keep focused and continue to improve, then money and all the other trappings commensurate with the modern footballer will look after themselves.

But Clough admits that Hughes seems so mature that he sometimes has to remind himself just how young the attacking midfielder is; still technically a minor who is not old enough to legally buy alcohol.

Hughes has a Twitter account, the mini-bio section of which simply reads 'Happiness is the key'. Why nothing about being a footballer?

"I do not want to put anything about football or seem arrogant. I'm still a 17-year-old lad and I have not done anything yet," he said.

That is not strictly true. In matter of months he has gone from relative obscurity to one of the hottest young properties in the Football League.

On Friday the Derby Academy, where most of his peers still play, breaks up for two weeks. There will be no such chance for Hughes to relax as he excitedly looks forward to his first Christmas as a professional.

"That is all a bunch of lies, rumours, as are all the stories about me. I get told about them but they just go straight over my head," Hughes added.