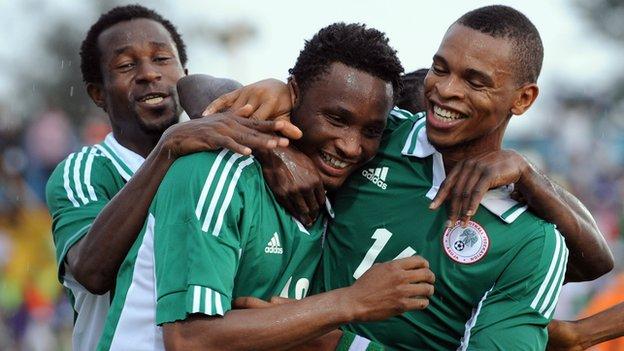 Nigeria's sports minister Bolaji Abdullahi believes the Super Eagles could benefit from having no expectations on them heading into the 2013 African Cup of Nations.

The team failed to qualify for the last tournament in Gabon and Equatorial Guinea but the two-time winners are still rated as one of the favourites in South Africa.

Prospects have in the past been high for Nigeria heading into international tournaments.

However, in the build-up to the Nations Cup, these have since lowered with many believing that reaching the knockout stage of the competition will be considered a success.

"We have to be realistic, this is a new team and we have to be very careful." Abudallahi told reporters.

"It will not be easy for the team under coach Stephen Keshi to be building and contesting at the same time.

"We [the government] do not expect much from the team because it is still a new team.

"I hope they will benefit from this and give their best as expected without any pressure whatsoever."

Interestingly, when Keshi was appointed by the Nigerian Football Federation in November 2011, the ex-defender was handed the mandate of steering the side to the 2013 Africa Cup of Nations and 2014 World Cup.

Abdullahi distanced himself from those targets and insists that the government's expectations are next to nothing - even thought the government funds the team.

"They are not under any target from us so that's very clear," he said.

"The coach and players need support from every Nigerian, and as government we will give them the necessary support they need.

"So let's hope that everybody will put their hands together for the team to do well."

Regarded as continental giants, Nigeria have won the Nations Cup only twice, on home soil in 1980 and in 1994 in Tunisia.

Meanwhile, Nigeria are expected to announce their 17 foreign-based players for their Nations Cup training camp in Faro, Portugal this week.

They will join a 24-man locally-based squad in Portugal for the friendlies against Catalonia and Angola in Spain and Portugal respectively in January.