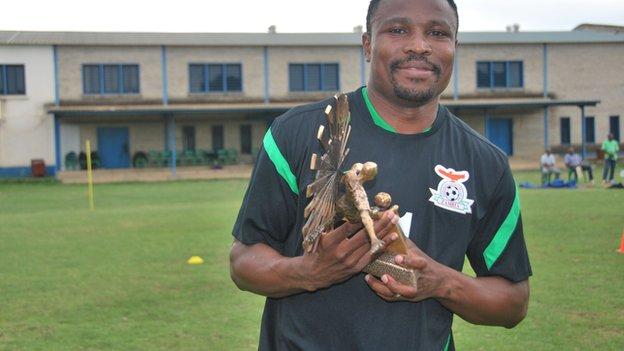 Newly crowned African Footballer of the Year Christopher Katongo has expressed his gratitude to football fans all over the world who voted for him.

The Zambia captain was revealed as the winner on Monday - taking just over 40% of a record number of votes.

He told BBC Sport: "This is the thing that I will never forget in my life.

"As a football player you want to achieve something and I have done it through the fans who have recognised my hard work. This is fantastic."

Katongo led his country to their first Africa Cup of Nations title in February, scoring three goals in the tournament and also converting a spot-kick in the penalty shoot-out victory over Ivory Coast in the final.

The people of Zambia, the people of Africa and people all over the world who voted for me, they have given me one step forward

His performances earned him a place on the shortlist for the award, alongside Ivory Coast pair Yaya Toure and Didier Drogba, Demba Ba of Senegal and Morocco's Younes Belhanda.

And the 30-year-old was delighted to have triumphed in such illustrious company and also to join a list of huge names, including Jay Jay Okocha and Patrick Mboma, who have previously won the award.

"This is one of the best awards, to be named among the best ever African players," added Katongo. "I will never forget it. Just to be among the great players who have won this award, it's unbelievable."

"And the award is special because it is the people, the fans, who have spoken. I want to take the opportunity to thank them.

"I have done my best and at the Africa Cup of Nations this year I was the MVP (most valuable player) of the tournament. So the people can see what I have been doing and that's why they think that this guy deserves the best.

"People have recognised what I have been doing.

"The people of Zambia, the people of Africa and people all over the world who voted for me, they have given me one step forward. And I can still do better."

Zambia coach Herve Renard paid tribute to his star player and hinted that his team can go to the Nations Cup in South Africa next year confident that they can successfully defend their title.

"Christopher deserved the award," Renard told BBC Sport. "He is a fantastic team-mate and this year he was able to bring all his team-mates together to win the African title.

"I have worked with Christopher for four years now, his commitment is fantastic. He is mentally strong and a hard worker, he can play up front in the middle or as a winger. Wherever he is playing, he never complains, he is playing for the team.

"Nobody is bigger than the team but when Christopher was out with a knee injury for two or three months, we could see Zambia was not the same team that won the Nations Cup.

"Now he is at he top level again, we don't have to fear any team."

Zambia kick off their Nations Cup campaign against on Ethiopia on 21 January and they will also play Nigeria and Burkina Faso in Group C.