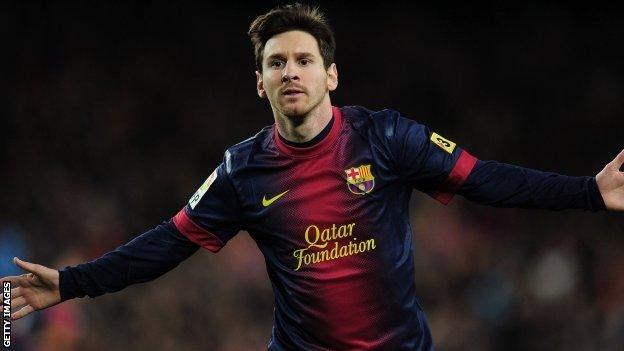 Lionel Messi has agreed a new contract with Barcelona, keeping him at the Spanish club until 2018.

The Argentina international, 25, has enjoyed a record-breaking year for club and country, scoring 90 goals in 2012.

Defender Carles Puyol, 34, and midfielder Xavi Hernandez, 32, have also agreed new deals that will keep them at Barcelona until 2016.

"In the coming weeks Puyol, Xavi and Messi will sign their respective new contracts," the club confirmed.

"Messi is already, for me, one of the top of all time. He is out of this world and in a class of his own, but he is also playing in that team too. Let's see if he could be number one. He is up there with the greatest - Maradona, Pele and all those."

"This news means that FC Barcelona has secured its ties with three of its most important players."

All three players are products of the club's famed academy.

Messi has been with Barcelona since he was 13 and made his league debut as a 17-year-old against RCD Espanyol on 16 October 2004.

He has been in the best goal-scoring form of his career in 2012 and surpassed Gerd Mueller's 40-year-old record of 85 goals scored in a calendar year with a brace in a 2-1 win over Real Betis on 9 December.

Messi took his tally for the year to 90 on Sunday with another two goals as Barcelona defeated Atletico Madrid 4-1.

He has scored twice in each of the last eight games he has started.

Messi is in contention to be named World Player of the Year for a fourth time, having been included on a three-man shortlist alongside Cristiano Ronaldo of Real Madrid and Barcelona team-mate Andres Iniesta.

Puyol, meanwhile, made his Barcelona debut in 1999 before becoming captain in 2004 - the same year Messi made his league debut.

He has made over 560 appearances and captained the club to three Champions League, five La Liga and two Copa del Rey titles.

Xavi is the longest-serving Barcelona player of the three, having made his debut in 1998. He holds the record for the most appearances with the club with 651.

Barcelona are in a strong position to claim a 22nd La Liga title this season.

They have a nine-point lead at the top of the table, having won 15 of the 16 games they have played so far this season.