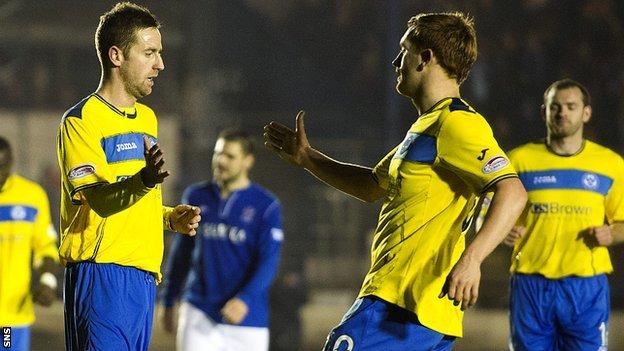 Three second-half goals saw Saints through to the fifth round after the Central Park pitch thawed out.

And Lomas was delighted to have played the match, with fears of a festive fixture pile-up in his mind.

"The tie was becoming a pain and the main thing was to get it out of the way," he said.

"We didn't want a replay and then to have to play again in two days.

The Northern Irishman admitted that the First Division side had proved to be stubborn opposition.

"All credit to Cowdenbeath," he said. "We had a few hairy moments there on the counter-attack.

"It wasn't easy on the eye, but the most important thing is to be in the hat for the next round. The job was done."

Saints now face St Mirren in the fifth round.

Cowdenbeath boss Colin Cameron felt the scoreline was harsh on his side.

"It was the same story for us," he said. "The last six games we've only scored one goal.

"We've created five or six good chances, their keeper has made some fine saves and we've had a couple just go past the post.

"For it to finish 3-0 is harsh on us. I'll take more positives than negatives out of tonight. Hopefully we can take something from this game and use it to our advantage on Saturday."