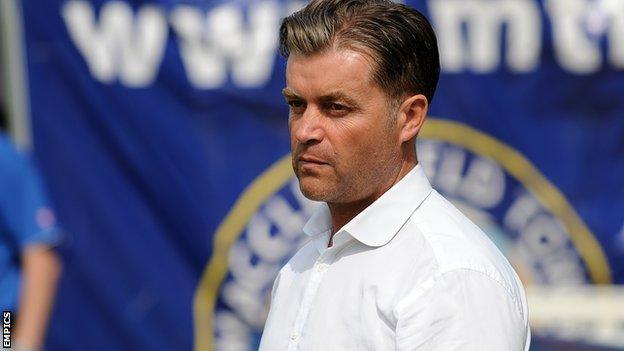 Manager Steve King is pleased with the progress made by Macclesfield after being relegated from League Two.

and after many changes at the club, both on and off the field, he has guided the Silkmen to ninth in the Blue Square Bet Premier.

"Directors have gone, and we've brought in a new style of football.

"We couldn't have asked for a better start. It's a work in progress," he told BBC Radio Manchester.

They used to play long ball all the time. We've completely gone full circle and sometimes we overplay. You have your philosophy of how things should be done.

"Rome wasn't built in a day. We're still in the FA Cup and we've beaten a lot of the top sides.

"If we can stabilise and push towards those play-offs, I think it's becoming a good season."

in the FA Cup on Tuesday, with a home tie against Championship leaders Cardiff City in the third round awaiting the winners.

As well as overseeing a huge turnover of players, former Lewes boss King has tried to implement a more patient style of football at the Moss Rose, which he believes has been generally well received by supporters.

He continued: "Early on, people were coming up to me and saying it's the best football they've seen here in 10 years, with the way we play with no fear.

"They used to play long ball all the time. We've completely gone full circle and sometimes we overplay. You have your philosophy of how things should be done.

"It's an entertainment business. If you're fighting to get out of the league, the result is all-important, but we will try and play so that we can get the result and the performance if we can."