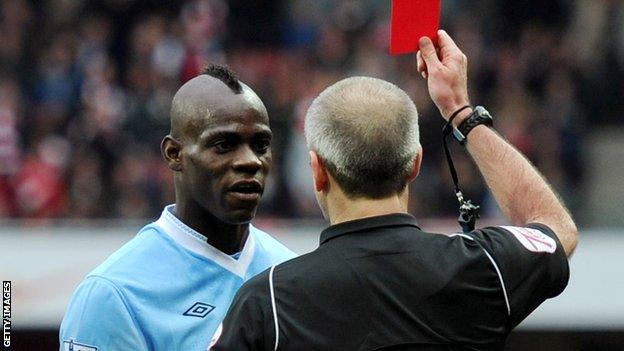 Mario Balotelli has dropped his tribunal action against Manchester City after accepting a two-week fine over his disciplinary record last season.

The hearing had been due to take place on Wednesday until "amicable" talks on Tuesday night between the two parties.

In a statement, City said the striker, 22, had made the decision "as a sign of respect for Roberto Mancini, the supporters and the club".

The striker had opposed City's decision to fine him after he missed 11 games domestically and in Europe last season because of suspensions.

The striker had been expected to appear at the tribunal in person, along with his Italian lawyer and a representative from the Professional Footballers' Association, while City were set to bring their own legal team.

A two-week fine is the maximum penalty stipulated in standard player contracts.

It is unusual for internal disputes between clubs and their players to go to a Premier League tribunal. The PFA has advised the player throughout.

City began the disciplinary process after Balotelli was sent off against Arsenal in April 2012.

In all, he received nine yellow cards and three reds - one of them retrospective - during the season.

Balotelli was taken off early in the second half of City's 3-2 defeat by Manchester United on 9 December, and then left out of their squad altogether for the 3-1 win at Newcastle on Saturday.

After the match, City manager Roberto Mancini said: "At this moment, Mario is not in good form and for this reason he is at home. It is only for this reason. To get back into the team he needs to work in training and when he plays, he needs to play well."