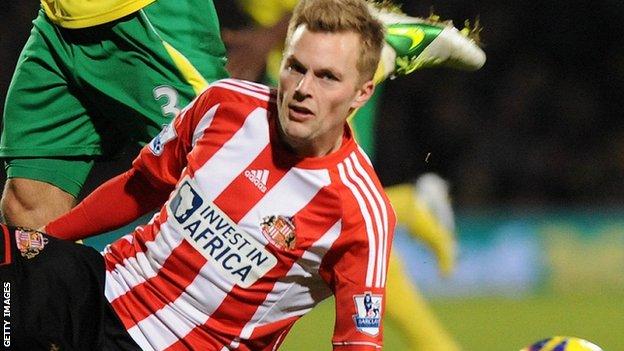 Saturday's match against Southampton could be vital to Sunderland's chances of avoiding relegation, according to midfielder Sebastian Larsson.

The Swede believes the match at St Mary's is more important than last week's against Manchester United,

"That wasn't the type of game we'd pin-pointed for three points, though we did our best," he told BBC Radio Newcastle.

"The teams around us are the big games now."

Sunderland dropped to 16th in the Premier League after the defeat at Old Trafford, leaving them just a point and a place ahead of the Saints, who have a game in hand.

The South Coast club have found a good run of form in recent weeks, winning three and drawing two of their last six games.

But Larsson believes Sunderland have the class to pick up results against their fellow strugglers.

"If we can play to some of the levels we've shown lately we're going to be all right," he said.

"Like Reading last week, we managed to get three points then, and hopefully we can do the same against Southampton.

"You need a couple of wins against all types of teams and you fly up the league. There's no time to dwell anymore, it's about getting the points and that's what we've got to fight hard to do."