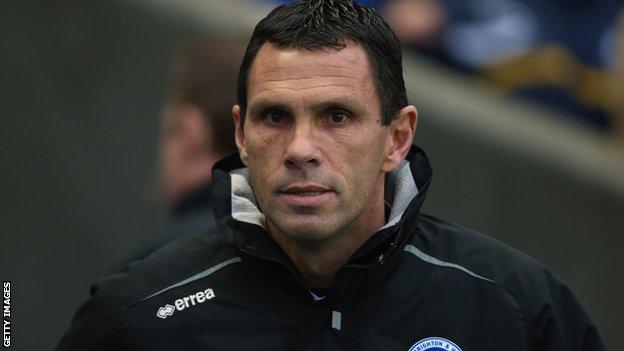 The Seagulls are eighth in the table, three points off the play-off places, despite only three wins in 15 games.

Poyet told BBC Sussex: "Without winning games we are there. It shows you how average this division is. Competitive, but average.

"With the results we have had, we should be 15th or 18th. We are still there because it is average."

The Uruguayan was again left to rue missed chances on Saturday following their 0-0 draw at home to Nottingham Forest.

It was Albion's ninth stalemate in the league this season and their eighth in the last 15 matches.

I am very critical with myself and once more I'll say I need to sort it out. We do everything so right until we have the chance to have a shot

Poyet is well aware their profligacy in front of goal is costing them points.

"I am very critical with myself and once more I'll say I need to sort it out," he said.

"It doesn't matter how you play if you don't win. I need to do my best to get the eleven [players] that are going to win football games.

"I pick the team, pick the players and choose the way we play. I try to convince them it is the best way to win football games. We expect them to go on the pitch and do it.

"We do everything so right until we have the chance to have a shot."

It is not the first time this season Poyet has been critical of Brighton's finishing.

In October, he declared himself "bored" of talking about their problems after scoring just once in five games.

"We created enough chances to score in the first half [against Forest]," he continued.

"Without playing so well in the second half we had the best chances of the game.

"It was the same as every week. Frustration is a word that is very easy to say. I am disappointed,

"You cannot have 15 shots without players in front of you and not hit the target. That is average."