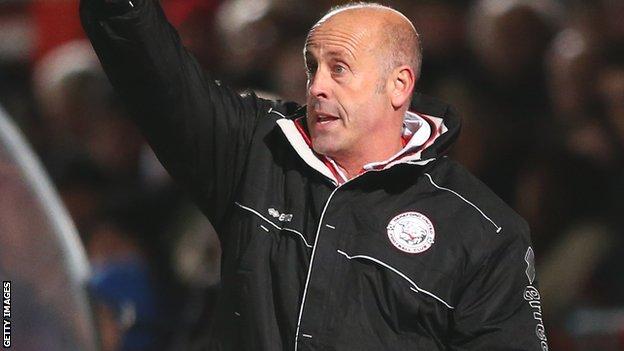 Hereford United manager Martin Foyle blamed the thinness of the Bulls squad for their second cup exit in five days.

Foyle made six changes to the starting line-up that lost 2-1 at home to Cheltenham in Tuesday night's FA Cup second-round replay.

But the Bulls crashed out of the FA Trophy, also at the second-round stage, with a 3-0 home defeat by Chelmsford.

"We are just short on personnel, end of story," the Bulls boss told BBC Hereford & Worcester.

"We've got to get to 1 January and bolster. The squad is getting smaller by the week.

"We've got eight league games in January, the same in February and that doesn't make things any easier."

Chelmsford's goals all came before the break, Robert Edmans beating the offside trap to slot home on 20 minutes before quickly heading a second.

The visitors then made it 3-0 with another header, by Dave Rainford, three minutes before the break.

Saturday's game marked the second of a run of seven home games out of 10 for the Bulls, who stand 11th in the Blue Square Bet Premier table, just seven points adrift of the play-off pack.

And, having already been forced into one change by the loss of top scorer Ryan Bowman, who suffered a medial knee ligament injury against Cheltenham, Foyle's team selection was also geared round their busy league programme.

"This Saturday's game at Ebbsfleet was important in my mind, as I think we can still do well in the league," admitted Foyle.

"Should I have played Joe Heath? And Marley Watkins? I could have started him but he's on four bookings and I didn't want him to miss the Ebbsfleet or the Kidderminster game on Boxing Day."

While Foyle waits to see what can do in the January transfer window - and he has at least managed to extend Nuneaton striker Kyle Perry's loan for another month - the Bulls boss also knows that funds at Edgar Street remain tight.

The Bulls' timely four-match FA Cup run staved off the very real threat of the club being forced into administration, settling their six-figure debt to Revenue & Customs.

But, on the back of just 1,124 turning up on Saturday (Hereford's lowest home gate of the season - and less than a quarter of last Tuesday night's crowd), there is not a massively improved kitty.