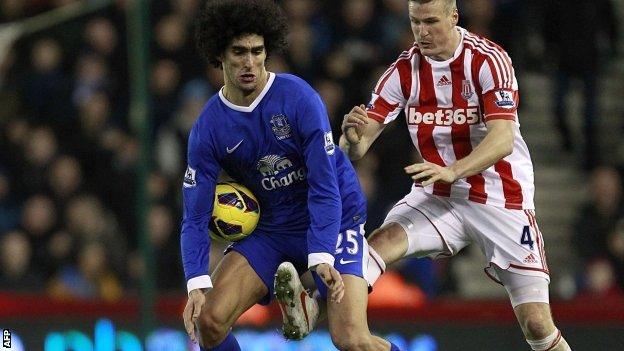 Everton midfielder Marouane Fellaini has been banned for three matches by the Football Association for headbutting Stoke's Ryan Shawcross.

The incident occurred in the 59th minute of Saturday's 1-1 Premier League draw at the Britannia Stadium.

It was not seen by the match officials, but was caught on video.

Everton have decided not to appeal against the charge, meaning Fellaini will miss the Premier League games against West Ham, Wigan and Chelsea.

Referee Mark Halsey confirmed he saw two further incidents in the 71st and 91st minutes, also involving Fellaini and Shawcross, neither of which he deemed to be violent conduct.

"It was a terrible thing to do and I expect him [Fellaini] to be punished," Moyes said in his post-match interview.

And Fellaini, 25, said: "I apologise completely to Ryan Shawcross, my team-mates and to our fans at the game. I lost my temper and it was unprofessional."

"It is good to see the lad has apologised for his actions," Taylor said. "It is disappointing. He has had a great season and obviously it is an aberration.

"It was refreshing to hear the manager accept what he did was wrong and for the player to apologise. He's prepared to accept what comes his way."