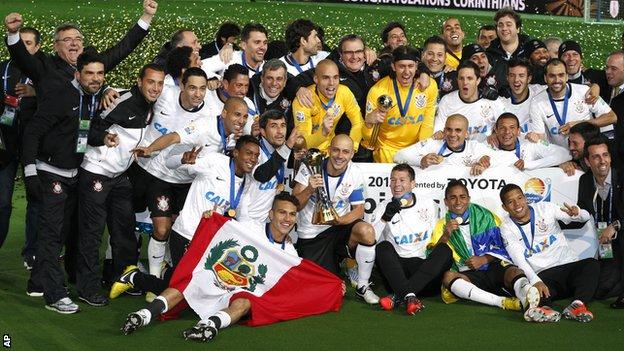 Last Thursday lunchtime Brazilian journalist Marcelo Barreto went filming around Stamford Bridge just after Chelsea had beaten Monterrey to qualify for the final of the Club World Cup. He spoke to a club employee who seemed unaware that the game had even taken place.

On the eve of the final against Corinthians he said that his most difficult mission was finding a Chelsea fan who was excited about the coming clash.

I spent much of last week attempting to explain this reality to Rio journalists. The BBC website came to my rescue. I watched the Chelsea-Corinthians match in the offices of a Brazilian TV station and was able to point out one of the opening lines of this site's live coverage: "OK, it's not the Premier League title or the FA Cup, and many would argue it's not even the League Cup."

This attitude astonishes the South Americans. But it is how things are - though not, I hope and imagine, how they soon will be.

Sunday was an excellent day for the Club World Cup, perhaps the best in the competition's short history. Corinthians against Chelsea could probably not be classed as a truly great game but it was a good one - and the most balanced since 2005, when the tournament was relaunched on an annual basis.

Corinthians are the third Brazilian winners - Sao Paulo beat Liverpool in 2005, and Internacional overcame Barcelona the following year. Both times, though, the South Americans recognised their inferiority, fought from a trench and snuck out to land a single blow on the counter-attack.

Only once have the South American champions chosen to go toe-to-toe with the winners of the Champions League - in 2007, when Milan's victory over Argentina's Boca Juniors was considerably more comfortable than the 4-2 scoreline might suggest.

Even the most fanatical Chelsea supporter would find it hard to argue that the December 2012 model of their side could be classed as Europe's best but Corinthians took the game seriously.

They took defensive precautions; dropping playmaker Douglas for winger Jorge Henrique, while there was an extraordinary display from goalkeeper Cassio.

They were never just hanging on, either. Coach Tite's defensive block was always formed with aggressive intent - to win the ball, close to the opposing goal if possible, and to take advantage of the gaps in the Chelsea rearguard.

They took the risk of a ball over the top of their defence for Fernando Torres to latch onto, but in return were able to keep a closer watch than most had imagined on Chelsea's attacking midfielders.

The consequence was that we had a genuine game, rather than a glorified version of attack against defence. And the signs are that future Club World Cups might throw up contests that are better still.

There was the massive and noisy presence of Corinthians fans in the stadium at Yokohama, establishing a benchmark for future Brazilian winners of South America's Copa Libertadores.

More importantly still, the fact that so many supporters were able to travel turns them into an embodiment of Brazil's economic boom - which is already making its mark on the pitch.

It is extremely significant that Corinthians' outstanding outfield player in the tournament - indeed, their only goalscorer - was a Peru international signed from a German club. Paolo Guerrero has now joined the ranks of all time Corinthians greats, alongside Rivelino and Socrates.

He is also pointing the way to a future where the major Brazilian clubs can hold onto more of their own players and also bring in some interesting imports. The influx of foreign talent - such as Clarence Seedorf at Botafogo - can only be beneficial.

This, too, needs to be placed in context. The Club World Cup is all very well. But it is not the Champions League, with its repeated opportunities for players to match themselves against the best.

In terms of revenue, organisation and levels of play, South America's Copa Libertadores falls well below Europe's premier club competition. The Champions League is where the stars want to be, and where the world's best players win the respect of their peers.

For the foreseeable future, the best South Americans will still overwhelmingly opt to move across the Atlantic, albeit at a later stage in their careers.

We are talking, then, of evolution rather than revolution. The quality of, and global interest in, the next few versions of the Club World Cup should serve as a measure of the speed of change.

But Sunday has left me more optimistic about the future of the competition. Before long perhaps the likes of Marcelo Barreto will not have to work so hard to find an English fan who cares about the outcome.

Q. What was your take on the Wednesday night fiasco? [the second leg of the Copa Sudamericana final between Sao Paulo of Brazil and Tigre of Argentina, where Tigre refused to come out for the second half after a fight in the tunnel with Sao Paulo security guards]. Was it fabricated sour grapes by the Argentines? Or were they justified in not coming back because they were unfairly treated? What effect could this have on Brazil and the World Cup?

A. 1- On the field, Tigre were more sinning than sinned against. Outgunned by far better opponents, they sought to level things up by provoking Sao Paulo into losing emotional control. It was not even close to being the dirtiest game I've ever seen, and the incident when Lucas of Sao Paulo picked up a bloody nose did not look like an especially deliberate elbow.

2- The referee seemed to see no reason for the second half not to take place.

3- It appears convenient for Tigre to go home as victims of injustice, rather than a side easily beaten on the field.

But that is not to say that no injustice took place. It does not seem to be in doubt that there was a fight between Tigre players and Sao Paulo security guards in the tunnel but we need to know exactly what happened,

Sao Paulo's version of events is that Tigre tried to invade the home dressing-room. Even if we fully accept this, the action of the club's security guards would still seem to be unacceptable. They are paid to keep a cool head in stressful situations and to use the minimum force necessary.

Conmebol, the South American Confederation, are traditionally very weak when it comes to punitive measures. This time they must confirm the facts and take action. The fact that Brazil are staging the next World Cup make this impossible to sweep under the carpet.