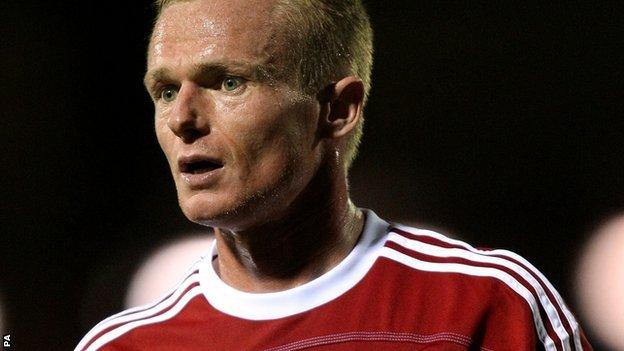 Captain Dean Keates insists Wrexham's priority this season is securing a return to the Football League.

Keates scored Wrexham's winner from the penalty spot to secure a 3-2 win over Solihull Moors in the FA Trophy.

But ahead of Monday's third round draw Keates says Wrexham's priority is the Blue Square Bet Premier title rather than the FA Trophy.

"The bread and butter for the club is the league," Keates said.

"The aim is to get out of this division and win the league at the end of the season.

"If that happens and then obviously we had a trip to Wembley that would be fantastic."

Andy Morrell's side have six league fixtures before the FA Trophy third round on 12 January.

And Keates says the FA Trophy victory over Conference North side Solihull Moors will give Wrexham confidence ahead of Friday's game at promotion rivals Grimsby.

Wrexham are currently third in the table, a point behind second placed Grimsby, but with a game in hand.

"We just want to win games and it breeds confidence," Keates added.

"It's another win and obviously on the back of last week's victory [over Nuneaton] we go into Grimsby on Friday with two wins.

"We will be focused on Grimsby now and what will be on Monday, will be."