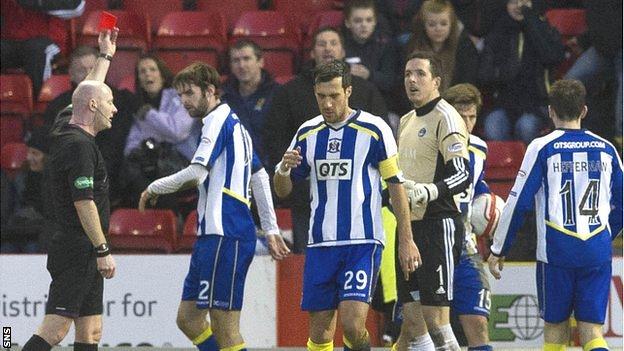 Aberdeen say they will appeal against the red card shown to goalkeeper Jamie Langfield in Saturday's 2-0 defeat by Kilmarnock at Pittodrie.

Langfield was sent off in the final minute of the first half by referee Craig Charleston, who judged that he had fouled advancing Killie midfielder Borja Perez in the penalty box.

Aberdeen have slipped from second to seventh in the Scottish Premier League.

Dons midfielder Gavin Rae was dejected at seeing his side suffer a fifth consecutive home game without a win.

Rae said: "It's frustrating to see the penalty given and I certainly didn't think it was a red card because there were enough men back to defend even if he had gone round Jamie.

"Those decisions sometimes go for you and sometimes they don't.

"We had to change formation, taking Rory Fallon off, and you're up against it with 10 men."

"It was a great run from Borja Perez and he kept on going," he said.

"I thought he had over-run it.

"It's hard to say, and I've not seen the replay so I can't say whether it was a penalty or a red card or not."