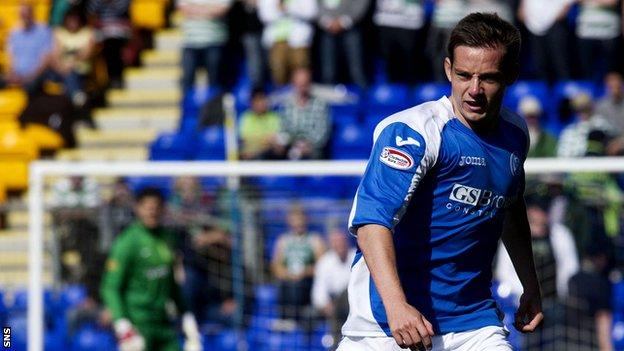 Peter Pawlett would prefer to extend his loan spell at St Johnstone - unless Aberdeen manager Craig Brown persuades the winger he can be a regular starter.

The 21-year-old expects the two clubs to discuss his future this week.

And those talks will come after he was praised for his performance in Saints' 2-2 draw with Hearts - his first start since September following injury.

"If I go back and sit on the bench, it would not be ideal for me," said the Scotland Under-21 international.

"I would probably like to stay here until the end of the season."

In Pawlett's absence, Ryan Fraser has emerged as the wing talent at Pittodrie.

But the 18-year-old has rejected the offer to extend his contract beyond next summer.

That has led to speculation about a January sale if the Dons wish to cash in early on the Scotland Under-19 cap.

Brown has warned that he only wants to use players committed to the club, leading some to suggest that Fraser might be used sparingly for the remainder of the season if he decides to remain at Pittodrie and leave as a free agent.

Pawlett could be viewed as a replacement but would rather remain where he is seen as a first-team regular.

"Ryan Fraser plays in my position, but hopefully Aberdeen can see the bigger picture," he said.

"I am contracted to them for next season and I want to play week in, week out.

"I was born in Hull, but my brothers support the club and I've been there since I started playing.

"But your football career is short and I want to play."

Pawlett also believes he owes St Johnstone a debt for their patience with him.

"I was feeling sharp and playing well, but then I felt my hamstring go in training and it's happened a couple of times now," he said.

"St Johnstone have been doing a lot for me.

"It has been about nine weeks now without playing and then I got half an hour last weekend against St Mirren, so I'm a bit rusty at the minute."

Pawlett was praised for his performance against Hearts by manager Steve Lomas and goalscorer Steven MacLean but believes he could have done better with a couple of efforts thwarted by fine shot-stopping from goalkeeper Jamie MacDonald.

He recognises that such performances might persuade Brown to take him back to Aberdeen.

"The manager might say to me 'prove me right'," said Pawlett.

"I will just have to work harder as I am not going to accept sitting on the bench. I will work my socks off."

Unfortunately for Pawlett, he will not have the chance to wear the blue socks of St Johnstone for the next two matches.

Aberdeen are the Perth side's next Scottish Premier League opponents and the terms of his loan mean he cannot play against them - or in Monday's Scottish Cup tie at Cowdenbeath.

"If Aberdeen had been knocked out by Motherwell, I could have played, but they won," he explained.