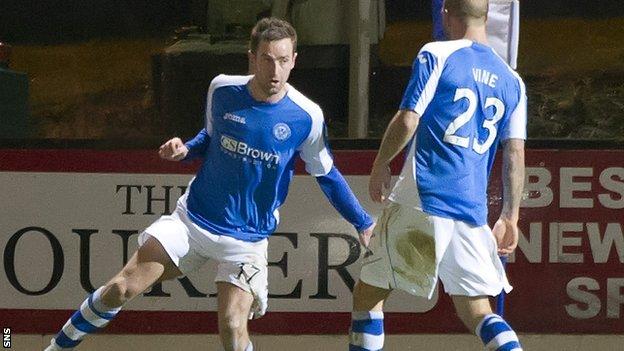 Steven MacLean says St Johnstone team-mate Murray Davidson had to pass to him for their - as he owed him for driving him to Perth.

Davidson had the opportunity to shoot for goal himself but elected to set up MacLean to make the final score 2-2.

"We travel from the Borders and I'm always giving him lifts," said MacLean.

"He doesn't even put his hand in his pocket for a pint, so he is due me that! He would have had ear ache all the way home if he hadn't."

Striker MacLean, who has now scored four times in 13 St Johnstone appearances, had an opportunity to grab the winner but admits he knew little of the effort that was cleared off the line by Ryan McGowan.

Substitute Gregory Tade had gone into a challenge with goalkeeper Jamie MacDonald and the ball ricocheted to MacLean with the goal gaping.

"It just hit me on the shin," said the 30-year-old formerly of Rangers, Sheffield Wednesday, Cardiff City, Plymouth Argyle and Yeovil Town.

"But the guy got back to clear it and that's been our sort of luck recently."

Tade had been dropped to the bench, where he joined fellow striker Nigel Hasselbaink and fit-again Craig Beattie.

And MacLean, who was up front along with Rowan Vine, said that it showed the strength in depth that Saints now have in the striking department.

"It was the first time that Viney and I have played up front together," said MacLean of his strike partner who opened the scoring.

"Tads was unlucky not to play, but we have a good squad and hopefully that will help us push further up the league."

On-loan Aberdeen winger Peter Pawlett started for Saints on his return from injury and forced a couple of saves from MacDonald.

"Little Peter Pawlett did well," said MacLean, who himself had a spell on loan with the Dons.

"I thought he was fantastic for us.

"He missed a couple of chances, but he will learn from that."