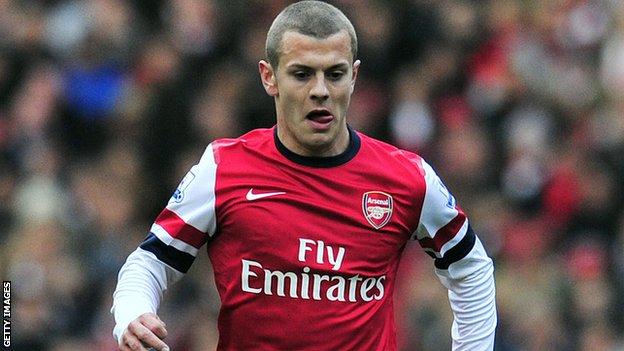 Arsenal and England midfielder Jack Wilshere is close to agreeing a new contract at the north London side.

"I am talking to the club and probably will be committing my future in the next couple of weeks," he said.

The 20-year-old, who returned in October after 15 months out injured, said he was sure that Arsene Wenger was still best placed to lead the club.

"There is no question he [Wenger] is the right man. The players have to look at themselves," Wilshere added.

It is understood that Aaron Ramsey and Carl Jenkinson have agreed new contracts, which may be announced once Arsenal have also secured new deals for Alex Oxlade-Chamberlain and Kieran Gibbs.

Wilshere missed the whole of last season after a catalogue of injuries which started with a stress fracture of the ankle, suffered in a pre-season friendly against New York Red Bulls in July 2011.

In February this year he suffered a stress fracture in his right foot before also undergoing knee surgery in May after a long-standing injury flared up.

While qualifying for the knockout phase of the Champions League, Arsenal are 18 points behind leaders Manchester United in the Premier League table and were knocked out of the League Cup last week by League Two side Bradford City.

"I know the team are going through a bad stage at the moment, but that is like any team," Wilshere said.

"We can still realistically win everything we are in. I know we are a long way behind in the Premier League, but football changes quickly.

"If we win three games and another team loses a couple and draws one, we are back in it. It is not in our hands, so we need a bit of luck."

Wenger has been in charge at Arsenal since September 1996. But after winning three Premier League titles and the FA Cup four times in his first 11 years, the Gunners have not won a trophy since 2005.

"It is something we have to change. It is there and it adds to the pressure. It has been too long for a club like Arsenal," Wilshere admitted.

"We used to win trophies in the past so there is no reason why we cannot.

"We have got good players. Maybe there is just a mental block we need to get over. When we get our first one, it can all start to happen."

Arsenal travel to Reading on Monday looking for only their third away win in the league this season.