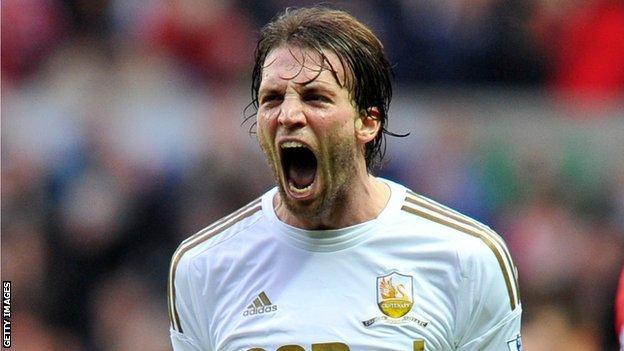 Manchester United will lead the Premier League by four points going into Christmas after a frustrating draw at resolute Swansea.

Swansea hit back with Michu tapping in after Jonathan De Guzman's shot had been blocked by keeper David De Gea.

United struck the woodwork twice after the break, while Van Persie reacted angrily when Ashley Williams' clearance hit him on the back of the head.

Williams lashed the ball away after 74 minutes and it struck a grounded Van Persie, who angrily squared up to the defender, with both players being booked.

Van Persie had gone close to grabbing a winner for his side when he looped a shot on to the crossbar and team-mate Michael Carrick also had a header tipped against the woodwork.

"It's a huge result for Swansea. They battled throughout. What a terrific year 2012 has been for them and they will feel they more than deserved a share of the spoils."

United piled on the pressure late on and Van Persie also had a shot blocked by Williams before Ashley Young's follow-up effort struck Ben Davies in the goalmouth.

Despite the second-half rally, United were held to a first league draw of the season by a stubborn Swansea.

The Old Trafford side had led the top flight by six points heading into the weekend but their advantage has been cut by two, with second-placed Manchester City beating Reading on Saturday.

United have kept only four clean sheets this season and have conceded 25 goals and, while their attacking exploits have regularly rescued them, it was not to be this time around.

It had started in promising fashion for the Red Devils as they forced Swansea keeper Michel Vorm, who was back after 10 games out with a groin injury, into two smart saves.

Vorm fended away a long range strike by Wayne Rooney before palming a Young shot wide after Carrick's defence-splitting pass.

From the resulting corner, Evra glanced in a header off the post, despite Leon Britton standing next to the upright.

However, United's defensive frailties were exposed again as Swansea equalised.

Wayne Routledge slipped a clever pass through to De Guzman and, although his shot was blocked by keeper De Gea, Michu put away the loose ball for his 13th league goal of the campaign.

United were aggrieved about a challenge on Van Persie by Chico at the start of the move, although the hosts still had plenty to do and the visitors' defending left a lot to be desired.

Centre-back Nemanja Vidic was making his first start for Sir Alex Ferguson's after three months out with a knee injury but there was still an air of vulnerability about United at the back.

An entertaining game was producing chances at both ends and a lacklustre Rooney might have hoped to have done better when he fired straight at Vorm from Evra's cut back.

United smothered Swansea in the final quarter of the match and, even though Van Persie, Carrick and Young went close, the hosts stood firm to avoid a third league loss on the trot.