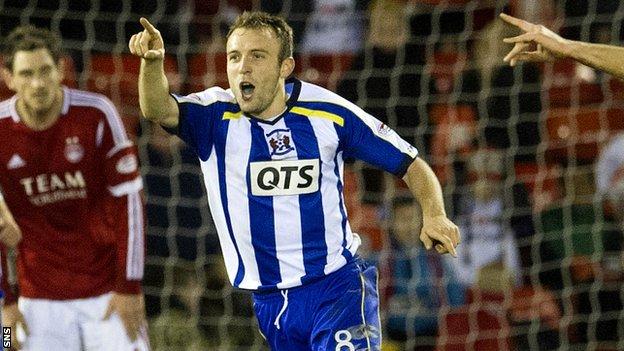 The Dons had keeper Jamie Langfield sent off on the stroke of half-time but dominated most of the second half.

"The second half, Aberdeen certainly came at us and posed us problems," said Nicholl after the 2-0 victory.

"I was grateful to see the second goal go in. We didn't do enough with the ball when we had an advantage."

With manager Kenny Shiels serving the first of a three-game touchline ban, Nicholl was left to oversee the dugout and watched his charges take the lead just before half-time.

Kelly netted from the penalty spot after Langfield had brought down Borja Perez, with the goalkeeper shown a red card for being deemed to have denied a goalscoring opportunity.

"It was a great run from Borja Perez and he kept on going," said Nicholl.

"I thought he had over-run it. It's hard to say, and I've not seen the replay so I can't say whether it was a penalty or a red card or not. That was a wee break.

"We weren't doing too badly. The way things have been recently, we wanted to keep it tight.

"It probably sounded negative to the players, but we we're just hoping to come up here and have a decent performance, and hopefully take something from the game."

Despite being down a man, Aberdeen did most of the pressing in the second half.

However, the visitors held firm and Kelly added a second goal with four minutes remaining.

"When you play against 10 men and are 1-0 up, you have an advantage," explained Nicholl.

"You should be confident and should be making the opposition work hard to get the ball off you. We didn't do that, and the players know they needed to do more with the ball.

"Personally, I was just delighted to get the points in the bag. The manager will be saying something different but, for me, it was all about getting three points away from home."