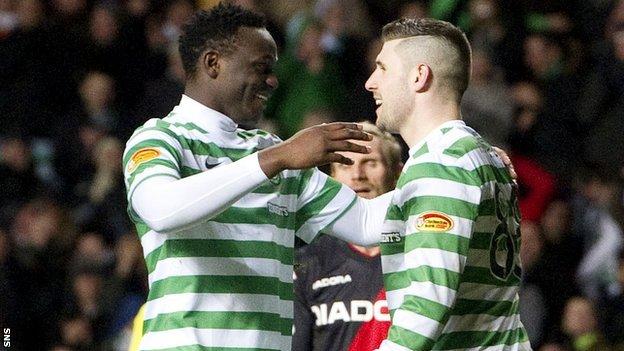 Celtic manager Neil Lennon has urged Gary Hooper and Victor Wanyama to sign the new contracts they have been offered by the club.

Speaking after what he described as an "excellent win" against St Mirren, Lennon was hopeful of coming to an agreement with striker Hooper.

However, Lennon reported that there had been no contact from Wanyama's representatives for several weeks.

Wanyama and Hooper both scored in the 2-0 win against the Buddies.

"For me, having spoken to him on a number of occasions, he's very happy here. He's a big player for us and he's enhanced his reputation here no end.

"I'm not saying he owes us anything because he doesn't but I think, in the short-term anyway, take the contract. It's a very good offer we've put in front of him.

"There's still a bit of mileage in it to go yet but I don't think we're far away.

"Same with Wanyama. If we can talk with his representatives again we will but that's been maybe a month or so ago now and we've not heard anything back from them."

Lennon felt challenges on Hooper and Beram Kayal should have resulted in penalties for his side in the victory against the Buddies.

"We missed good chances and I felt referee missed two clear-cut penalties, particularly in the first half," he added.

"It's a home win and it's a clean sheet. We're four points clear with a game in hand now, so we're starting to see a bit of daylight."