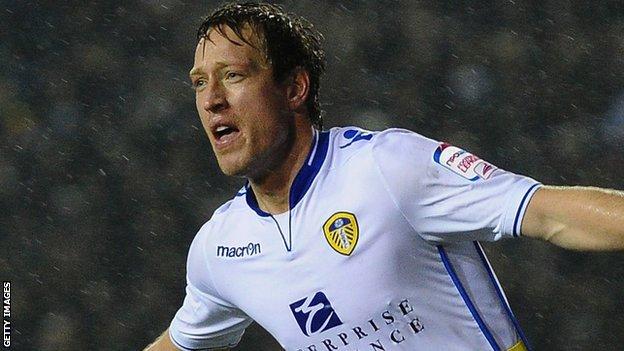 Luciano Becchio scored twice as Leeds came from behind to beat Middlesbrough in the Championship at Elland Road.

The visitors took the lead through Lukas Jutkiewicz, whose shot was saved before he scored with a follow-up via a deflection.

Becchio equalised with a half-volley on the stroke of half-time after Boro failed to clear their lines.

And he headed in a corner to secure victory and take his tally for the season to 17.

The victory came a day after

It was Leeds' fourth successive home league win - a feat they last achieved in October 2011 - and lifted them to eighth in the table.

Middlesbrough missed out on a hat-trick of league wins as they dropped six points behind leaders Cardiff.

Sam Byram's downward header, which drew a superb save from goalkeeper Jason Steele, was as close as Leeds came before Jutkiewicz beat Paddy Kenny at the second attempt after sprinting clear.

After the break, Boro defender Jonathan Woodgate, playing against his former club, fluffed his attempted clearance from Byram's cross to give Becchio space to lash home off the woodwork.

Jutkiewicz was denied by Kenny's midriff as he closed in on goal, but Becchio showed the more ruthless edge.

After his header from a Diouf cross was tipped over by Steele, he rose highest from the resulting corner to beat the goalkeeper with another header.

The visitors had 17 minutes to earn a share of the points, but, despite Emmanuel Ledesma and even Steele going close, Leeds clung on.

Leeds manager Neil Warnock: "It was a super day for our new owners at the end of a really positive week. I have to be delighted, especially coming from behind to beat a very good side. We put our bodies on the line near the end and there were a lot of tired legs out there."

Middlesbrough manager Tony Mowbray: "We had a host of chances and missed them. We were through one-on-one two or three times and threatened the goal more than enough to have got something out of the game, but give Leeds credit. They worked hard and defended well without putting us under much pressure."