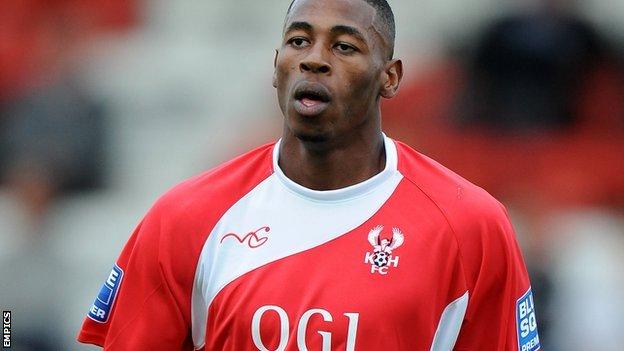 Cheyenne Dunkley put the hosts ahead with an 18-yard shot before the Darts equalised through Jacob Erskine's header from Ryan Hayes's cross.

But Matt nodded the Harriers back in front and he then finished from Mickey Demetriou's cross for 3-1.

Mike Williams fired in from Kyle Storer's pass and a left-footed strike from Lee Vaughan completed the rout.

"I just thought we were too strong for them in the end.

"It's not a one off - I thought we were too strong for Wrexham and for Newport. The finishing was good and we're playing on the front foot.

"This was the only game on in the division so everyone needs a lot of credit."

"We've got to learn because you've gone 2-1 down you can't go and try and win the game in the first ten minutes of the second half. We've lost a bit of discipline.

"We're trying to rush things, stretch things, and it's disappointing to see, so I'm very disappointed.

"The first half it was a good game, and there was a big decision just before half-time. There was an out-and-out penalty which the referee says he hasn't seen, and those decisions aren't going for us.

"The players have to play with a bit more intelligence."