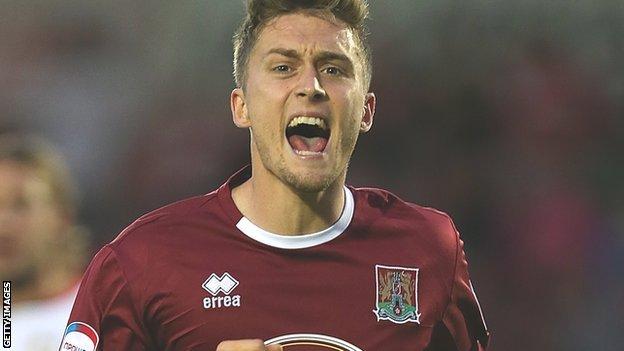 Northampton Town claimed their first win in five matches as they secured a home victory against Aldershot.

The hosts went ahead through Jake Robinson, who raced on to a long ball and fired underneath Jamie Young.

They made sure of the win in injury time when striker Clive Platt lobbed Young for the Cobblers' second goal.

Aldershot, who suffered their first defeat in seven away games, had chances but Danny Hylton shot wide and then headed off target from a free-kick.

"Very often the players get the credit but there is an army behind the scenes here. The groundsman and his team worked very, very hard to get the game on.

"There wasn't much sexy football being played but it was a good, old-fashioned British game and we had to do the ugly things very well.

"I am pleased for Clive Platt. He's a Championship player at League Two level.

"Jake Robinson has picked it up, he's worked very hard and he's always got a chance with me. He's proved he can score. I'm delighted for him and Clive."

"I think the least we deserved was a draw but we lacked the clinical side of our game. In the last game we were very clinical and today it wasn't there."

"We've created a number of chances, more than in any other game this season, and I thought the confidence of the players and their passing was excellent.

"On another day we will score goals and we will get ready to face Bristol Rovers on Boxing Day."